ADVERTORIAL: To hear how you can help someone who has a gambling problem, press play below:

CHARLOTTE AMALIE — U.S. Secretary of the Interior Ryan Zinke made a bold statement in the U.S. Virgin Islands on Thursday to celebrate Transfer Day in his own special way.

While Transfer Day is always celebrated in the U.S. Virgin Islands, this year marks the 100th anniversary of United States control over the chain of islands formerly known as the Danish West Indies. Zinke was in attendance Friday to mark the importance of the celebration.

To mark the special occasion of the 100th anniversary of the U.S. acquisition of the islands, Secretary Zinke visited and played a prominent role in the festivities. While his presence alone in the small chain of islands is notable enough on its own, the always bold Zinke also sent a powerful message with something incredibly simple — his socks.

Secretary Zinke is no stranger to making statements. He previously wore socks emblazoned with the image of President Ronald Reagan to a Senate hearing and rode a horse to the Department of the Interior on his first day of work. But this latest move by the secretary says much more than some of his previous ones.

In a statement to the Virgin Islands Free Press, a spokesperson for Secretary Zinke explained the motivation behind the choice:

“The Secretary believes that the U.S. Virgin Islands are an important part of the fabric of America. His visits with veterans yesterday and wardrobe choices reflect that.”

Secretary Zinke also made time during his trip to meet personally with veterans residing in the territory: 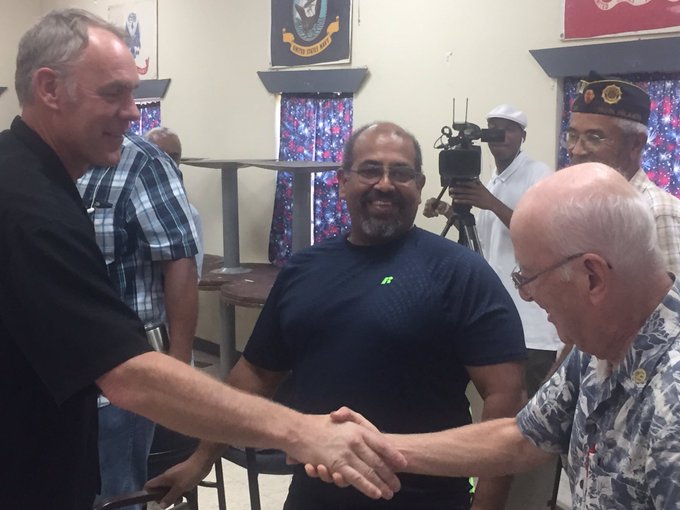 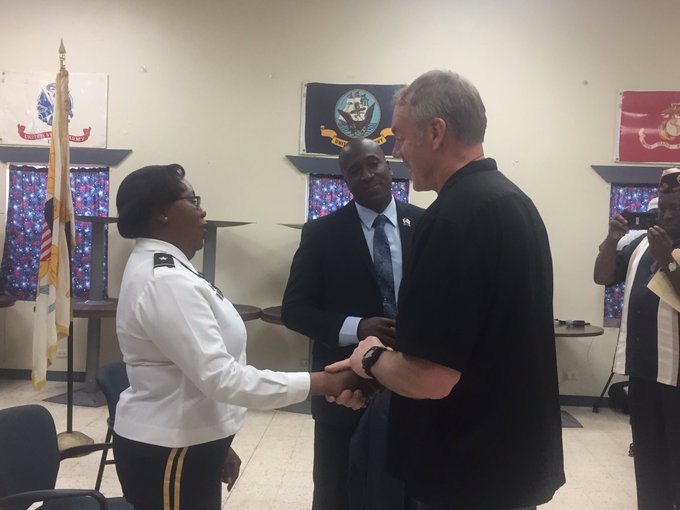 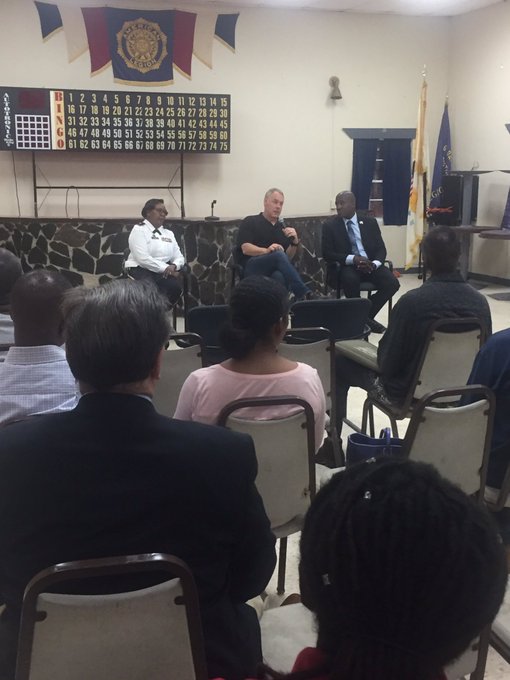 Overseeing the territories of the United States falls under the purview of the secretary of the interior, and Zinke’s commitment to that role was not lost on many. John Canegata, chairman of the USVI GOP, issued a statement praising the secretary’s decision to visit so early in his term:

“Secretary Zinke’s visit to our islands in his first month on the job is a reaffirmation of the strong commitment that President Trump made to the Virgin Islands during his campaign. This administration is committed to ensuring a better, brighter future for all Virgin Islanders.

By contrast, the now-former administration failed to send the Interior secretary to the territory until the final months of its second term.”

The festivities marking the centennial celebration of Transfer Day included a parade featuring members of the armed forces:

An American flag was raised over Fort Christiansværn, a fort that dates back to the Danish West Indies:

They sat directly next to Secretary Zinke — with his American flag socks on full display:

Secretary Zinke’s socks are just another personal touch he’s added to his role as secretary of the interior.

Royal Caribbean Will Homeport Freedom of the Seas In San Juan From Now On ... With Stops In SXM and STT

TRUMP TWEETS: Ryan Zinke Out At Interior … He Was A Frequent Visitor To Territory

PAHO: Caribbean Has Many Overweight People … Steps U Can Do To Avoid Diabetes

Are License Plates Required For Vehicles In The U.S. Virgin Islands? You Wouldn’t Think So If You Have The Power Of Observation: COMMENTARY

In The Middle Of Hurricane Season, Lloyd’s Of London Says It Will No Longer Write Insurance Policies In USVI

Fuck you
on WRONG AND STRONG: WAPA Blames ‘Double’ Bill To Its Customers On 2017 Storms

Tanks to all. Them stupid motherfucks. Who. Wanted. To change. Course. Now. They are no way to be found. They. Did change Course. But for the worse. Only. Stupid. Illiterate.…