CHARLOTTE AMALIE — Juan José Santovena flew out of Cuba on a plane bound for Panama one day in March, the beginning of a long journey to rejoin his son, Hansell, who lives in Hialeah.

Santovena is now stranded in St. Thomas, one of 20 Cuban migrants whose travel documents were delayed by American officials because the Cubans allegedly refused to cooperate with a migrant trafficking investigation.

On Friday, Santovena detailed the saga of the Cubans during a lengthy telephone interview with el Nuevo Herald from St. Thomas — part of a strategy to pressure U.S. immigration authorities to supply them with travel documents known as paroles. Without the paroles, the Cuban migrants cannot board planes to travel to South Florida where most of them have close relatives.

Santovena’s son, Hansell, and Claudina Lambert, aunt of a young woman in the group, Yubisnei Franco — deemed the alleged denial of paroles as an illegal pressure tactic. U.S. Immigration and Customs Enforcement (ICE) has said it cannot comment on the case because it is under investigation.

While parole delays for Cuban migrants have occurred before, this is the first that a large group of island migrants has complained publicly about the problem.

The case made headlines last month when one of 20 Cubans contacted el Nuevo Herald to denounce U.S. immigration authorities for the delay in granting the paroles. That person asked that his name not be published and provided only a bare outline of the group’s journey to the Virgin Islands.

Santovena, in his interview Friday, added richer detail to the account. It’s clear that the 20 Cubans left their country separately and only met each other for the first time after they gathered on the island of St. Lucia in the Caribbean and boarded the boat that took them to the Virgin Islands.

Santovena began his trip March 24 when he boarded a jetliner at Havana’s José Martí International Airport bound for Panama City. There, Santovena boarded a flight to Guyana where he switched to a plane bound for Barbados. From Barbados he flew to nearby St. Lucia.

Though none of the 20 Cubans knew each other before they boarded the boat that transported them, all of them — including Santovena — knew that boats left St. Lucia with Cuban migrants for the U.S. Virgin Islands. Cuban migrants who have no U.S. visas, can — nonetheless — stay in the United States if they manage to reach U.S. soil under the wet-foot/dry-foot policy. Cuban migrants interdicted at sea are generally returned to the island.

“I had been told that in St. Lucia Cubans were contacted to undertake that type of journey [to the Virgin Islands],” said Santovena.

At 7 p.m. one day in late March, Santovena and 19 other Cuban migrants gathered at a marina and later that night sailed on a boat to the Virgin Islands — a distance of about 400 miles.

“When we hit the beach, everybody ran away from the boat,” Santovena recalled. “I couldn’t even walk because when we jumped off the boat and hit the water I twisted one of my ankles.”

At any rate, the Cubans were not detected by immigration authorities when they landed late one night. The boat that transported them turned around and left in a hurry, Santovena said.

As a result, he added, no one really got to know the captain and none of the Cubans knew who organized the trip. The boat left the Cubans on the island of St. John, across the bay from St. Thomas.

At daybreak, the group walked to the marina to take a ferry to St. Thomas so they could report to immigration authorities and claim status under the Cuban Adjustment Act.

“The first ferry left at 5 a.m.,” recalled Santovena. “Then we took a bus to the immigration office and we sat down in the parking lot to wait for the office to open.”

Once the office opened, an immigration official told them to return the next day. Santovena said that when the group returned, they were put off yet again because of Holy Week.

After Holy Week, said Santovena, group members were given forms to fill out with biographical details. Then they were told to set up individual appointments through an immigration Internet system.

Once Santovena showed up for his appointment, he was told to come back about 12 to 15 days later so he could answer questions about his life in Cuba. At that appointment, he said, an immigration official showed him what he said was his parole document. 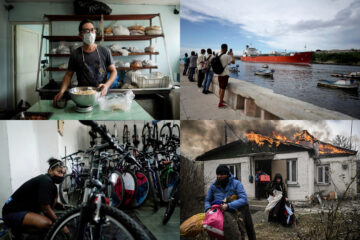 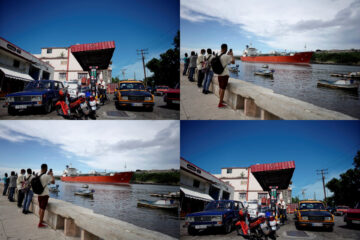 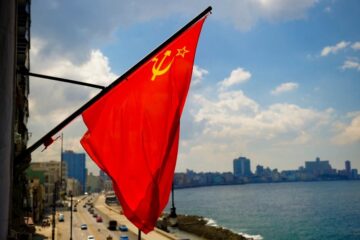 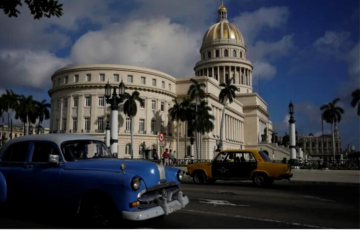