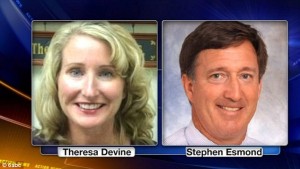 CRUZ BAY – A Delaware family poisoned during their stay at a St. John luxury resort is not doing well and will likely never recover, according to authorities.

At a press conference this week, Gov. Kenneth Mapp  said three of the four members of the Esmond-Devine family poisoned in March are unlikely to resume productive lives.

“Unfortunately, I have to give some bad news,” Mapp said. “The family that were the victims of the poisoning at Sirenusa is not doing well. The poison used by Terminex is a toxin to the neurosystems and it has affected this family horribly.”

While the family’s mom Theresa Devine, 48, seems to be recovering, their father, Stephen Esmond, 49, has reportedly suffered severe paralysis and needs support to even sit up. Their teenage son Ryan is also paralyzed from the neck down, and their other son Sean, an 11th-grade student, has been in and out of a coma.

“For all intents and purposes, the doctors do not expect any significant recovery from their present condition,” Mapp said.

The family was airlifted off-island for treatment following the March 20 poisoning in St. John. Mapp said that Terminix International, the company allegedly responsible for the family’s poisoning, would be criminally charged, however federal authorities would not comment on that claim as they are still investigating the incident.

Devine, 48, is a dentist who practices in Broomall, Pennsylvania, while Stephen, 49, is the head of the Tatnall Middle School in Wilmington.

Estonian citizens can travel visa-free to Caribbean and Pacific countries