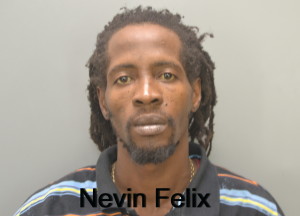 Nevin Felix of Bellevue Village was arrested and charged with unlawful entry, destruction of property and disturbance of the peace-domestic violence, the VIPD said.

Felix was arrested in connection with an incident that occurred on Thursday July 23 where allegedly he broke into a woman’s home, causing damage to one of windows on the house, according to the VIPD. He is also accused of disturbing the peace during the incident.

Felix was remanded to the Bureau of Corrections, pending an Advice of Rights hearing.