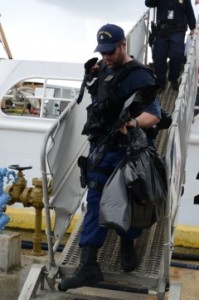 The crew aboard the cutter Dauntless seized the 275-pound shipment after they intercepted a go-fast boat July 17 in the Caribbean Sea about 80 nautical miles north of Aruba.

Authorities said the boat, a sample of cocaine and the suspects were transferred into the custody of the Venezuelan Navy, while the rest of the drugs were taken to Puerto Rico.

“Once again, the crew of the Dauntless, along with our Dutch partners, proved to be a worthy opponent,” said Cmdr. Fritz Kuebler, commanding officer of the Coast Guard Cutter Dauntless. “We take great satisfaction in knowing that our efforts are helping to secure not only American streets but also the streets of our Caribbean neighbors.”

The Dauntless is a 210-foot cutter that is based in Galveston, Texas.