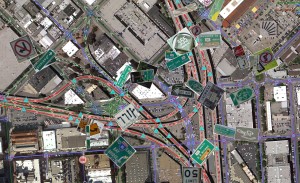 BOSTON – One of the best visualizations of race in America might be called pointillist. By mapping one dot for every Census-registered human in the country, color-coded for race, a team at the University of Virginia’s Weldon Cooper Center of Public Service rendered abstract social data painfully personal.

Robert Manduca, a Harvard Ph.D. student in sociology and a mapmaker, has brought the power of the dot to a new dataset: Jobs. Using 2010 LEHD Census data, and much of the code that brought the racial dot map to life, Manduca created an interactive map of one dot for every job location in America.

Manduca’s point hits homes when you look at a map of New York City. Higher-income professionals are heavily concentrated in ultra-expensive Manhattan. Meanwhile, a fair amount of industrial activity can still be seen throughout parts of north Brooklyn, while Queens has a wide diversity of employment—reflecting the record job growth that borough has recently enjoyed.

Meanwhile, San Francisco and Oakland have just a sprinkle of manufacturing and trade labor left. To the south, electronics heavy-hitter San Jose is relatively loaded.

Though he studies urban economic development, Manduca was still somewhat surprised to see how important downtowns remain as employment concentrators. By a significant measure, most jobs are still outside urban cores, “the result of a retreat from America’s cities that has been going on for decades,” as the New York Times has written. But in some cities, employment—particularly highly skilled and high-paying employment—is growing in downtowns, and declining in the suburbs.

Manduca was also curious to see how concentrated jobs are in the suburbs, too. “I thought they’d be more evenly spread,” he says.

As with any kind of map, some nuance is inherently lost in the quest for clarity. In this case, all American jobs are reduced to four main categories. Plus, the LEHD lacks data for Massachusetts, Puerto Rico, and the U.S. Virgin Islands, so those places are just plain missing. And there are certain jobs that aren’t counted in this particular Census data set, or that aren’t available to the public. “There are a lot of federal government jobs that aren’t in the data set for security reasons,” Manduca says. “There are parts of D.C. that appear to be very empty.”

Explore the full interactive map, “Where Are the Jobs?,” here.