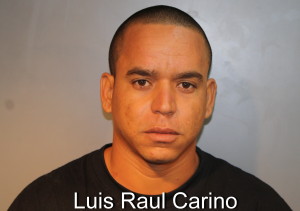 FREDERIKSTED – The Virgin Islands Police Department continues to step up its efforts to remove dangerous illegal guns from the territory, with its twenty-eighth arrest on St. Croix Monday.

The VIPD arrested Luis Raul Carino, 31, at 4 p.m. on Monday, July 27, after a joint federal-territorial operation was executed. Members of the Virgin Islands Criminal Investigation Bureau and the U.S. Bureau and the Alcohol Tobacco and Firearms (ATF) Task Force executed the search warrant at the residence of Carino.

During the execution of the search warrant Virgin Islands police recovered an AK-47 ssault rifle, a 9mm Pistol and numerous quantities of ammunition, the VIPD said.  As a result, Carino was arrested and charged with unauthorized possession of a firearm.

Bail for Carino was set at $50,000.00. Unable to post bail he was remanded to the Bureau of Corrections, pending an Advice of Rights hearing.

Carino’s arrest represents the twenty-eighth (28th) illegal weapons arrest charge on St. Croix, with a total of fifty-four (54) weapons having been confiscated by the VIPD since the beginning of the year.