BVI: Lifestyle On A Boat Isn’t That Hard To Get Used To 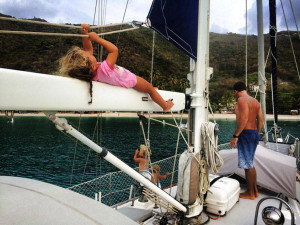 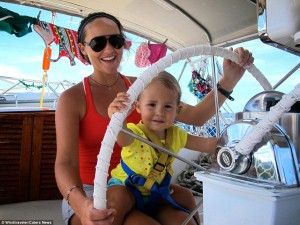 ROAD TOWN, Tortola – Brittany Meyers and her husband, Scott, live on a 44-foot sailboat in the British Virgin Islands with their three children, all under 3.

“This surprises zero people who know us,” Meyers, 36, told me. “When I was younger, my main goal was to live in Africa.”

She was volunteering in East Africa during her 20s, in fact, when a safari company executive approached her with a job offer.

“He said, ‘Do you have any marketing experience?'” she recalled. “All I had done is wait tables, but I was, like, ‘That’s marketing.’ So I ended up working for the safari company for three years.”

Her husband, 39, bought his first boat at age 28 with plans to live on it in chilly, gray Seattle.

They met while racing sailboats on Lake Michigan. So when the couple, then childless, quit their jobs in Chicago and set sail in 2010, their family and friends didn’t register much surprise.

They returned home in 2012 to have their first daughter, Isla, sold their old boat, bought a larger boat and headed back onto the water.

Then Meyers learned she was expecting twins. Haven and Mira were born 16 months ago, and the family wasted no time setting sail a few months later.

Meyers said they plan to stay on the boat for the next 10 years or so. They’re weighing their schooling options (island public schools, island private schools, home schooling) and finding ways to supplement the money they saved before they first set sail.

Scott has a 200-ton captain’s license, so he works as a mariner when they’re at sea and sells real estate when they’re back home in Chicago — typically for a few months during hurricane season.

The Meyers said the family is staying at her parents’ home in Arlington Heights, Illinois until October. Asked her if it feels more constricting to live on the mainland or on a boat:

“In some ways, it’s a lot harder here,” she replied. “On the boat, the girls are never more than 12 feet away from me. I always tell people, ‘Boats are actually pretty baby-proof, minus the whole surrounded-by-water thing.'”

The cabinets are all locked. Everything’s fastened to the floor. Things don’t topple over. When they’re awake and sailing, the girls are tethered and harnessed to the boat.

None of which stops critics from accusing the couple of needlessly putting their kids in harm’s way. Meyers chronicles their adventures on her blog, www.windtraveler.net , and on Facebook, where she frequently hears from people who think she’s loony.

“They fall into two camps: First, the people who believe it’s just unsafe to be surrounded by water,” she says. “Second, the people who say our girls are being raised in a bubble and aren’t getting socialized and are going to grow up and be freaks.”

Freaks. Sure. From all that sunshine and quality time with their parents and exposure to other cultures.

“It’s not like we’re floating at sea for days and days on end,” Meyers said. “We’re in port a lot of the time. Our girls are around other kids all the time.”

Yeah, but is it really fair to deny them the all-American childhood spent strapped into a car seat, riding from one scheduled activity to another?

“We sometimes feel bad they’re not in soccer or gymnastics,” Meyers said. “My husband especially, he was very much the athlete. But we go paddle boarding. They climb trees. They climb all over our boat. They’re always interacting with the natural environment, so it’s sort of a yin and yang.”

And the together time is enviable.

“We definitely think of it as a gift,” Meyers said. “We structured our lives and worked and saved, and, for the most part, our girls have been with their mom and dad 24/7. I think that’s a good thing.”

Most here would agree, it’s a beautiful thing.

BVI: Lifestyle On A Boat Isn’t That Hard To Get Used To