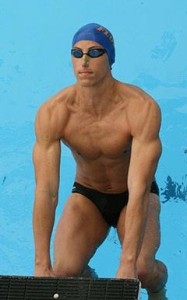 DETROIT – There was a time when Rex Tullius gave it all up, a time when the Michigan native and former University of Florida all-America swimmer decided to hang up his suit.

Having a life outside of the pool simply became more important than what he started to feel was the hopeless pursuit of an Olympic dream.

“I just wanted to focus my energy on work,” Tullius said on the phone Sunday, adding that it was after failing to qualify for the 2012 Summer Olympics for the USA that he — at least for the moment — decided to retire.

“A lot of swimmers have a hard time transitioning to the workplace and I wanted to make sure it didn’t happened to me,” he said. “So I stopped swimming to compete, and I did it just to train and stay in shape.”

Little did Tullius know that giving up the sport would actually make his dream a reality.

When Tullius called it quits, he said a close friend came to him offering a job in commercial real estate development. He accepted, and would eventually move to the Virgin Islands.

It was the end, temporarily, as it turned out, of a swim career that began at Maltby Middle School and extended through his freshman year at Brighton High School  in Michigan before his family moved to Florida.

Tullius had no plans of jumping back into racing competitively, at least on a regular basis.

But that’s where he stands today. It’s still kind of surprising to him, he admits.

“It was by happenstance that a coach I knew from Orlando had been in the Virgin Islands for 15 years, at least part of the time,” Tullius said. “And he’s the coach for the island next to mine. So I started swimming a little for him. He told me I could represent the (Virgin Islands) national team and go to the Olympics, and it fell into place, I guess.”

It was almost too good to be true.

Still possessing top-tier speed in the pool despite the time off, all Tullius had to do was change his flag from the United States to the U.S. Virgin Islands, and he felt confident he could be in Rio de Janiero for the 2016 Olympics.

He had met the FINA international “B” time in the backstroke, which is how it is decided who gets to go in smaller countries — rather than an Olympic Trials like there is in the United States. Meeting that time, he said, was an “almost definite I’m going to make it.”

Tullius remembers all too well recording personal-best times at the 2008 and 2012 Trials in his two backstroke events and placing as high as fifth in 2012, but did not make the U.S. team.

“Only the top two get to go for the USA,” Tullius said. “Even though my time might’ve been seventh at the Olympics, it just doesn’t matter. Only two from each nation could go to each event.”

Tullius’ personal best time in the 200 — a 1:57 flat — would’ve been good enough for sixth overall. But with only the top two in each nation attending, and former high school and Florida teammate Ryan Lochte also competing the 200 that year, the space was very limited.

This time around, he gets to skip all that.

“Having not to worry about that is great,” Tullius said. “Because if you were in big swimming nations, you wouldn’t even be able to go.”

As far as how he’ll perform once he gets to Rio, Tullius isn’t quite sure.

He readily admits his times in 2008 — when he was training six hours a day — were much faster. Right now, he’s around a 2:01, he said. But he plans on rededicating himself and hopes to start seeing his old times as the Games approach.

“I’ve sorta been just kind of half-assing my efforts,” he said. “So I decided I’m going to train a little bit harder the next 12 months, put my head down and really put my best foot forward.”

Asked if he would’ve gone through another round of Olympic Trials to earn his spot, and Tullius’ answer was quick: “No, I would not have.”

“People just have that dream, and they keep chasing it forever,” he said. “But my situation is just so unique that it drew me back in in the sense that it was a very good chance I would make the Olympics based on my previous times.”

He knows he won’t keep chasing forever. He has a full-time job and too many responsibilities now. But he’ll take this shot.

St. Croix's Rakeem Christmas Has Been Beating The Odds For A Long Time