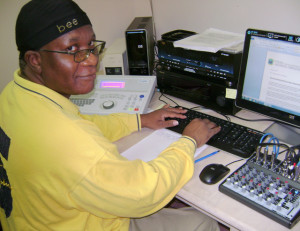 CHRISTIANSTED – Legendary radio broadcaster Alvin “Alvin Gee” Southwell apparently died at his apartment in St. Croix from natural causes Thursday, according to friends and family. He was 57.

People who listen in to Southwell’s popular news roundup program said a WLDV “Da Vybe” 107.9-FM radio disc jockey announced on the air at 4:30 p.m. that Alvin Gee would be on at 5 p.m., but listeners to the show never heard his voice live again.

His radio station posted this message on Facebook tonight: “Da Vybe Family, It is with deep sadness we must announce that we have lost a valued member of our inner circle & family – our news director, Alvin Gee.107.9 FM Da …Vybe would like to extend our heartfelt condolences to his family and friends as they join us in this moment of bereavement. We ask for understanding during this time as we mourn the lost of our dear friend and the Virgin Islands’ beloved news anchor.”

On Sept. 10, 2014 Southwell collapsed at the microphone while delivering the morning news on WLDV 107.9 FM, the station where he then worked as the news director.

According to station management, Southwell suffered what appeared to be a drop in his blood glucose level and he began to experience diabetic coma nearly two years ago. But after being treated in the hospital he returned to work again.

Relatives living on St. Croix contacted by the Virgin Islands Free Press said that Southwell is originally from Antigua. They said they first heard that Alvin Gee had died on WSVI-TV Channel 8 news tonight.

Southwell was a private person who shunned the media spotlight. His relatives said they did not know his exact age.