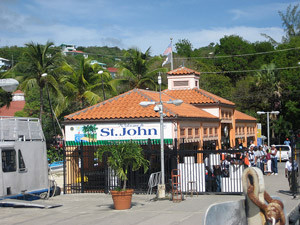 CRUZ BAY – A 37-year-old man said he was kicked and beaten by two men before having his wallet stolen near the Barge Ramp in St. John yesterday afternoon, according to the Virgin Islands Police Department.

Police were notified by the 911 Emergency Call Center at 1:39 p.m. Thursday of a disturbing the peace call on the Southside Road near the Barge Ramp, the VIPD said.

The man told police that as he was getting off of a safari bus near Southside Road two slim black men got off the bus at the same time. As they got near the exit for the barge ramp, all three of them got into a fight in which the man said he was repeatedly struck and kicked.

The two men then removed the man’s wallet from his pants, according to police. The wallet contained an undisclosed amount of cash, credit cards and personal identification. The two men then fled the area.

The man would not tell police what led to the fight and he was unable to provide a detailed description of his assailants. The man also refused medical treatment for the injuries he sustained in the robbery, police said.

Officers conducted a search of the area and recovered several pieces of the victim’s personal identification but were unable to locate the wallet itself.

St. Thomas' Rashawn Ross Makes An Impression Wherever He Goes