Man Drowns At Cramer Park While Two Friends Are Nearby 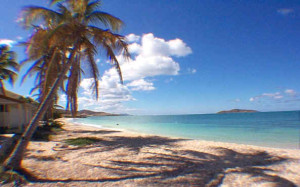 CHRISTIANSTED – A middle-aged black man was found on the beach at Cramer Park on the East End of St. Croix Wednesday night, an apparent drowing victim, according to the Virgin Islands Police Department.

Police on regular patrol were dispatched to Cramer Park at 6:35 p.m. yesterday to investigate a possible drowing, the VIPD said.

Officers arrived at the beach and observed the still body of a black man lying in the sand, clad in a white t-shirt and denim short pants, according to police.

Also at the scene were a man and woman, friends of the apparent drowning victim who explained to officers that the three of them had been partying and drinking on the beach, and the pair had taken the deceased into the ocean to wash him off, police said.

The two said that they had left the unidentified man alone for no more than five minutes when they noticed he was missing and began searching for him in the water, according to the VIPD.

The two discovered his body on the sandy bottom of the shoreline after a 10-minute search, pulled him onto the shore and attempted to perform CPR on him to no avail, the VIPD said.

The dead man’s body was transported to the Juan F. Luis Hospital and Medical Center where he was officially pronounced dead at 8:15 p.m.

The identity of the victim has not been released, pending notification of next of kin.

Almost Two Years In Office, Mapp Sets The Record For Most Uses of The Word ‘Charrette’ By A Sitting V.I. Governor

Man Drowns At Cramer Park While Two Friends Are Nearby