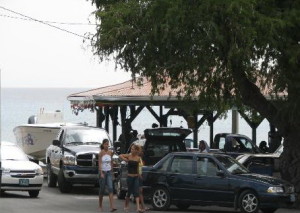 FREDERIKSTED – A 77-year-old man was found dead in a white pickup truck early this morning near the Fish Market in town, according to the Virgin Islands Police Department.

Police said received notification from the 911 Emergency Call Center at 5:52 a.m. today of a white pickup truck being submerged in the sea near the Frederiksted Fish Market with a male body inside, the VIPD said.

Officers responding to the scene confirmed the report and were successful in removing the vehicle from the waters, according to police. An ambulance was summoned and when the Emergency Medical Technicians examined the man, the EMTs found no signs of life.

The man was later identified as being Charles Stapleton of Estate Mon Bijou, police said.

A preliminary investigation into the matter revealed no apparent foul play and the case is being carried as a DOA (Dead On Arrival) pending the results of an autopsy.

Detectives are continuing their investigation into Stapleton’s death.