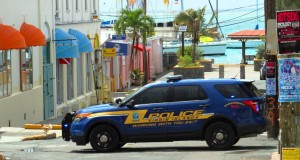 CHRISTIANSTED – Police are investigating a reported robbery that occurred Saturday at 6:49 p.m. near Pickard’s Laundry on Strand Street, according to the Virgin Islands Police Department.

The VIPD received notification from the 911 Emergency Call Center of a person who said that at 1:00 pm on August 1 he received a phone call from a man named “Hakeem” whom he had met previously telling him of an apartment for rent in the Christiansted area.

According to the man, “Hakeem” along with two other men picked him up in a tan-colored Ford Focus at roughly 6:00 p.m. and drove him to an unknown residence on Peter’s Farm Road, where ‘Hakeem’ and the two men went inside, leaving him alone in the vehicle, police said.

The man stated that when “Hakeem” came back to the vehicle, he pointed a black handgun at his chest as he removed his wallet from the right pocket of his cargo pants. The victim told the officers that he was then able to get out of the car and run towards Strand Street where he phoned 911, according to police.

The man said that he had $6,000.00 in cash along with several identification cards in his wallet, police said. The man said he was not injured during the robbery.

“Hakeem” is described as having a dark complexion, slim build and being about 5-foot, 6-inches tall with a low haircut, wearing a white t-shirt and short black pants. No description was given of the other two men, according to police.

Today Is The Anniversary Of The U.S. Making Denmark A Deal They Couldn't Refuse