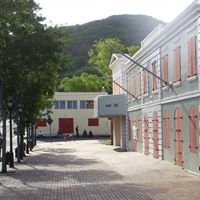 Bievenidos is west of the Lighthouse Mission

CHRISTIANSTED – A 30-year-old man was killed and a 24-year-old woman were injured when gunfire rang out near Bienvenidos Convenience Store just south and west of Time’s Square near the Lighthouse Mission in Christiansted last night, according to the Virgin Islands Police Department.

Police said notifications of gun shots fired came from the 911 Emergency Call Center at 8:35 p.m. Wednesday and that the shooting took place during the cover of darkness because a power outage had occurred in the area prior to the incident, the VIPD said.

Officers responded to the area and discovered a wounded male and female, each of whom had been shot multiple times, according to police. An ambulance was called to the scene and it transported the two people to the Juan F. Luis Hospital and Medical Center’s Emergency Room for treatment.

The man, later identified as Humberto Ortiz, died from the injuries he sustained despite the efforts of emergency room doctors, police said. The woman, identified as Jasandra Felix, is still being treated at the hospital for her injuries. No further information was available as to her condition.

A preliminary police investigation indicates that there was a power outage in downtown Christiansted and that during the blackout an unknown number of individuals approached the area, discharged shots at people gathered in the vicinity of Bienvenidos Convenience Store and then fled the area on foot. No description was provided of any of the suspects.

Detectives with the Criminal Investigation Bureau are investigating the killing, police said.