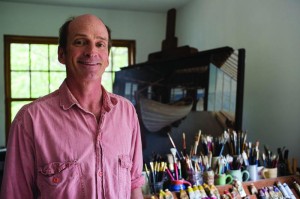 MARTHA’S VINEYARD, Mass. – There was a friend of mine, early on, who said, ‘Paint what you love.’”

Andrew Moore leaned against a corner table in his Harthaven gallery, surrounded by his own work on one of the first warm days of the season.

Behind him hung a nearly life-sized oil portrait of his daughter, Hannah, a parasol perched lightly on one shoulder.

“I’ve maybe done one or two commissions, but generally, I paint things that are integrated in my life or ignite my imagination,” Moore said.

A quick glance at the walls around Moore’s gallery is, then, an intimate revelation. There is Hannah, and there is the ocean. There are seals. Birds. The Gay Head Cliffs. A whaleboat, mid-construction, parked in a waterfront shop. In short, there is life; specifically, a life lived outdoors on the Island of Martha’s Vineyard, in the company of family and friends.

There was a mountain of gear stacked around a lean-to in the driveway: boats, boat parts, skim boards, a trailer. A basketball hoop presided over the main parking area, and from an overhang outside his front door, a Boston Bruins flag defiantly waved.

It was not the quiet, austere habitat you might expect of one of the Island’s most esteemed nature painters. It appeared to be first and foremost a family home, which may be why, as of this summer, Moore will be rejoining the gallery circuit, after more than twenty-five years of representing himself from his own backyard.

“I like my privacy,” Moore said. “We [Moore and his wife, web designer Heather Goff] have three children that we raised here. I turned fifty and it was kind of a milestone. ‘What do I want to do? What’s really a priority in my life?’ A priority is being able to work unfettered and spend time with my family. Those are the key components.”

Which isn’t to say the work-from-home model hasn’t suited Moore well. After eight years of showing his work in galleries on the Island, on Nantucket, and in Boston, he opened his own gallery in 1990 for mostly practical reasons.

“I found it challenging to make a living,” he remembered of those early years. “Galleries take fifty percent. I’m a pretty slow painter; I put a lot of time into each one, so that system was really hard. And since I lived here and I was in the studio all of the time anyway, it made sense.”

In the beginning, the gallery, a two-room structure with exposed beams and vaulted ceilings, was open for just a few months in the summer, and was used as a studio during the rest of the year. But Moore found he needed more of a physical separation between his work in progress and the finished paintings on the walls. He moved his studio into a room in his home, and kept the gallery open year round. In many ways, going back to traditional galleries will make this distinction even clearer.

Starting with a show this month, Moore will be represented by the Granary Gallery in West Tisbury, and will once again use the home gallery for painting. This, to Moore, is an appealing prospect. But it is the sales component he is most looking forward to handing over to somebody else.

“The business of art is a whole business, and my profession is painting,” he said firmly. “And I’m very connected with my paintings. I almost don’t want to be in the gallery. It’s like having someone discuss your children.”

The paintings-as-children metaphor extends to process, as well. When Moore is at work, his paintings are never far from his mind.

As a child himself, Moore was exposed to the visual arts by his father, an architect, as well as more distant relatives. His great-great grandfather, Nelson Augustus Moore, was a Hudson River School painter, and he grew up visiting homes where the elder Moore’s paintings lined the walls.

But far more present in Moore’s daily life was the influence of his mother, an art teacher, who often involved her children in projects around the house.

“The bath tub was stained with batik dyes,” Moore remembered, “and she had a photo room upstairs.”

Moore and his brother, Alley, were born in St. Croix, where, after finishing architecture school, their father relocated to start his own firm.

“It was like the wild frontier,” Moore said of those years in the Virgin Islands, in the early 1960s.

Although he remembers little of the experience, the call to adventure and an appreciation for design were instilled in him early on. Throughout high school, Moore explored various artistic media, while also excelling at science, math, and English. Following in his father’s footsteps, he enrolled in architecture school.

“The program was just fantastic,” Moore said of his time at the University of Virginia School of Architecture. “I learned the process of design, which kind of underlies painting and pretty much everything. It’s a way of working and thinking and making something from the ground up.”

This comprehensive, nuts-and-bolts approach is one that Moore followed as he transitioned from architecture student to professional painter. It was a gradual shift, and one that took place here on the island, where Moore has spent almost every summer of his life. Harthaven has been home to Moore and his ancestors dating back to the turn of the century.

Chris Morse, owner of the Granary Gallery and a supporter of Moore’s work since the early years, is looking forward to the chance to reintroduce his friend to the Island in August.

“It’s almost like another coming-out party for him,” Morse said. “The response has been interesting in that we have a patronage here that is fairly knowledgeable about Vineyard painters – who have been collecting for twenty-five years – and have never seen or heard of Andrew Moore.”

This, Morse believes, is not due to lack of talent or ambition. When asked how Moore’s work has changed or improved in the time he’s been away from the galleries, Morse said: “It’s hard to say that there’s a scale of improvement when I never remember him as being anything but remarkable.”

Still, Morse hopes that by handing over the duties of representation to somebody else, Moore will free himself up to do more of the work that he loves. “As an artist, if your focus is fractured to promote your work, it takes a great deal of energy. And his work deserves to be attended to well and professionally. I think it will help him.”

Perhaps this, then, is the beginning of a new chapter for Andrew Moore, one in which his work is available to a broader audience. Back in his home gallery, I imagined the space changed into the productive chaos of a working studio, and asked Moore if he thought being represented elsewhere might have any impact on his work or process.

Ever the traditionalist, Moore offered a sheepish smile and shook his head.  “I won’t really be changing much,” he predicted. “But it’ll be fun.”

BOC Employee Steals $700 Worth of Hair Weaves From Store