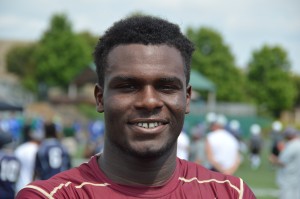 ATLANTA – Brookwood junior high school football player Leonard Warner is one of the top players for the Class of 2017 in the state of Georgia, but he currently has Alabama atop his list of schools on his personal Twitter page.

Warner said the schools he favors right now are: Alabama, Georgia, Auburn, Georgia Tech and Stanford. He also likes Boston College. There’s a picture of him on the grounds of Bryant-Denny Stadium in Tuscaloosa that tips off an early lean.

“It’s not too strong of a lean,” Warner said. “I just really like the atmosphere there. If I had to choose right now, it might be where I decided to choose depending on what I decided to major in. They have a really good business school from what I heard and an engineering school, so that’s something that goes into my decision. I could get a high, valuable degree from Alabama. They have a good school.”

Warner said he’s been considered to play at both inside and outside linebacker for the Crimson Tide.  He also mentioned Georgia.

“They show a lot of love,” Warner said. I can tell that they really want me at their school and they would appreciate me going there.”

The 6-foot-4, 218-pounder is rated by 247sports as the No. 7 outside linebacker and the No. 106 player overall nationally among 2017 prospects. Warner said Alabama leads approximately “21 or 22 offers” at this time. The AJC caught up with him last Friday at the Corky Kell 7-on-7 Invitational and had the chance to see where he’s at with his recruiting.

The St. Thomas native is an impressive athlete. His Hudl page charts him with 4.53 second speed in the 40 plus an impressive 39-inch vertical leap. He’s at the point now where he’s evaluating the schools as much as they are seeing what he’s made of.

“I have always kind of had a fondness toward Auburn just because they seem to play hard every single time they’re on the field and the school is nice and coach [Gus] Malzahn is kind of like a high school coach,” Warner said. “He is really down to earth.”

But his favorite campus was the one in Tuscaloosa.

“Those facilities are crazy,” he said.

He said he’s primarily dealt with defensive coordinator Kirby Smart as his primary recruiter. Smart wants him to play inside linebacker because of his intelligence and he can see him calling plays. Nick Saban’s message was how Alabama sets up players for life after football.

Warner just got back from visiting Duke. Notre Dame and Penn State trips are also on the radar. His father plays a big part in deciding his travel schedule. He didn’t have a timeline, but didn’t sound like he was going to go all the way to National Signing Day in 2017.

“When I’m certain on where I want to commit, that’s when I’ll do it,” he said.

“Well, No. 1, he is a great character kid, he’s been raised very well,” Jones said. “He has great parents and primarily he’s very coachable. Leonard wants to get better every single day. He takes coaching extremely well. He is great in the classroom – he has a 3.7 GPA. Beyond that, he has all of the measurables. He runs in the mid-4.5s and he is 6-foot-4. He’s got length and aggressiveness. He has everything you want on the field. He is pretty much the total package.”