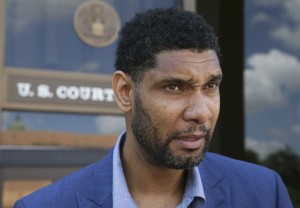 SAN ANTONIO – The off-the-court legal battle between Spurs star Tim Duncan of St. Croix and his former financial adviser Charles Banks intensified this week as Banks accused Duncan of wrongly casting himself as the “innocent” while portraying Banks as the “dishonest manipulator.”

Banks’ lawyers argue that records they have retrieved since a previous court showdown prove Duncan was sent complete packets for investing in hotel and winery ventures offered by Banks, including documents showing Duncan agreed to arbitration in case of disputes.

But Duncan’s lawyers dispute that and add that they are becoming “more confident” in their case as they review the documents, which a judge ordered Banks to produce.

In a motion filed Wednesday, Banks’ lawyers again asked U.S. District Judge Xavier Rodriguez to force Duncan to arbitration in California or to send a piece of his lawsuit to Colorado, where Gameday, one of the entities Duncan is said to have invested in, is based.

At a hearing in June, Duncan’s lawyers argued that he “likely” never received full investment packets and accused Banks of underhandedness that cost Duncan millions he invested with Banks. The judge asked for documentation that might show Duncan got the investment packets and contracts before making a ruling or setting the matter for further hearings.

“In an almost herculean effort to avoid any aspect of his case from going to arbitration, plaintiff, Tim Duncan, has spun a story that the facts simply do not bear,” states the motion filed by Banks’ lawyers. “First, plaintiff filed a state court complaint focused on: (1) his loan of $7.5 million to Gameday, and (2) an allegation that defendant Charles Banks wrongly ‘advised Duncan to invest in several wineries and investment funds that he controls.’ After Banks filed his motion to compel arbitration and in the alternative, transfer venue … Duncan re-positioned in an apparent attempt to continue the story with Duncan as the innocent and Banks as the dishonest manipulator, and stated that he ‘likely’ never received copies of the underlying investment documents.”

“But, the facts belie Duncan’s claim,” the motion stated. “While Duncan’s attorneys claim Duncan did not keep copies of his documents, others did. A painstaking search through voluminous documents reveals that Duncan was in fact sent complete copies of the offering documents, including … private placement memoranda, investor questionnaires, and subscription agreements in all three of the Terroir-family funds in which he purchased limited partnership interests: Hotel Fund I, Hotel Fund II, and the Winery Fund.”

Banks’ motion added: “Duncan also signed letters — with an acknowledgment that he ‘read and approved’ — disclosing the connection between Banks (others on the investment fund management team) and the funds. And the documents show Duncan was sent private placement memoranda fully disclosing the risks and uncertainties surrounding the funds, with entire pages discussing the management team. The amount of time and effort spent to gather any and all documents to refute the irresponsible — and entirely inaccurate — allegation that Duncan ‘likely’ never received complete documents should be charged to Duncan.”

Duncan’s lawyers say in their own motion that the documents cloud the relationship or role Banks had with others in the management team of the investment funds, including the investment advising lawyers, and sometimes the path the investments took. The motion also focuses largely on answering questions Judge Rodriguez had at the June hearing and legal analysis on why the case should stay in federal court here.

In response to Banks’ lawyers claims about Duncan, two of his lawyers, Richard Danysh and Michael Bernard, said: “Their response has a lot of bluster and conclusions but not a lot of analysis. The (documentation) had to be produced because the court ordered it to be produced. And, as we obtain more documents we become more and more confident in our case.”

As of yesterday, the judge had not indicated when he might set any new hearings or issue any rulings on the matter.

Duncan hired Banks during his rookie season with the Spurs while Banks was with CSI Capital Management. Banks left that company in 2007 and went on to be founder and managing partner of Terroir Capital LLC. He got Duncan to invest in his hotel and winery ventures after leaving CSI.

“He’s acted, to put it as politely as possible, dishonestly in his representation as my financial adviser,” Duncan said of Banks in June.

Duncan said he thinks he lost $25 million in Banks’ investments.

2nd Drowning In Two Days On St. Croix, This Time in Frederiksted