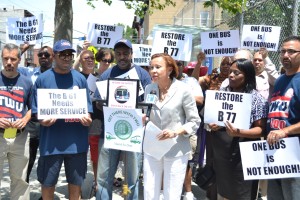 CHARLOTTE AMALIE – The Community And Police Association (CAPA) in conjunction with the Red Hook Community Alliance will be conducting a Town Hall Meeting for residents and commercial establishments in the communities of Red Hook, Nadir, and Frydenhoj on Monday August 10 at 6 p.m., at the Paradise Cove Resort in the Inspiration Hall, featuring representatives from the Virgin Islands Police Department.

The second Town Hall meeting will allow community members to voice their concerns, opinions and viable solutions garnered during last week’s meeting to the members of the VIPD who will be in attendance.

CAPA has been working successfully with several community-based organizations on St. Thomas such as the Savan based group, CAN (Community Action Now) and the Smith Bay Community Action Foundation, gathering individuals with definitive concerns and fostering effective results, through collective interaction.

Since organizing the Savan Clean-Up and Restore Project and the Street Naming Project in Smith Bay as part of the Geographic Information System through the Office of the Lieutenant Governor, CAPA is providing the foundation for positive change throughout the community.

Residents and Commercial Establishments within the areas of Red Hook, Nadir and Frydenhoj are strongly encouraged to attend the Town Hall Meeting, taking place on Monday August 10 at 6 p.m. at the Paradise Cove Resort in the Inspiration Hall conducted by the Community And Police Association (CAPA) in conjunction with the Red Hook Community Alliance.