Tropical Storm Danny Making A Beeline for the Virgin Islands 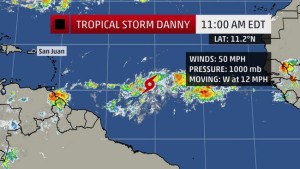 As of 5 p.m. ET, the storm has maximum sustained winds of 40 mph and is moving to the west at 12 mph. It’s the fourth named tropical system of the 2015 Atlantic hurricane system, following Ana, Bill and Claudette.

Once a storm reaches 74 mph, it becomes a hurricane.

“Additional strengthening is forecast during the next 48 hours, and Danny is expected to become a hurricane by Thursday,” the hurricane center said.

The exact track of the system beyond several days is questionable at this point, AccuWeather meteorologist Alex Sosnowski said.

“A track across the Windward or southern Leeward islands late Monday, then into the Caribbean later next week is most likely, provided the system remains relatively weak,” Sosnowski said.

However, he said a curve to the northwest and dissipation are also possibilities. 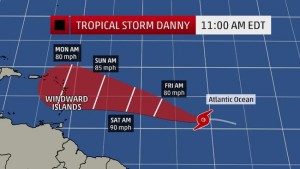 Woman Accused of Raping Another Woman in Simmonds Alley

Tropical Storm Danny Making A Beeline for the Virgin Islands