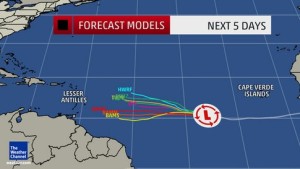 MIAMI — So far this year, the Atlantic has seen three tropical storms, but no hurricanes.

The most recent update from the National Hurricane Center stated that there is a high probability of a below normal season with six to 10 named storms, one to four hurricanes and up to one major hurricane.

Now activity is starting to ramp up a bit in the far eastern Atlantic. Just off the African coast, a storm is gaining strength and organizing. The National Hurricane Center is giving this cluster of storms a 50 percent chance of becoming a tropical cyclone by Aug. 19 and a 70 percent chance by Aug. 22.

While this storm system is still a long ways away, a lot of the models point it toward the U.S. Virgin Islands.

Some of these same models indicate it could reach hurricane strength wind speeds, which would make it our first hurricane of the 2015 Atlantic hurricane season.

If the storm system does gain enough strength and becomes better organized to be a tropical storm or a hurricane, it would be named Danny.

Failed Diver's Body Pulled From Waters Off Of Christiansted Tuesday