MIAMI – After struggling to puff out a thunderstorm yesterday, Tropical Storm Erika is becoming better organized and stronger and its forward speed has slowed down slightly as it moves towards the Virgin Islands and Puerto Rico.

Some of the effects of the storm might be felt in the Virgin Islands by 8 a.m. as the outer bands associated with the storm move through. Tropical storm conditions could begin as early as noon.

The small storm was located about 160 miles west of Guadeloupe  as of the 2 p.m. AST advisory from the hurricane center today.

Although its maximum sustained winds have increased to near 50 mph (85 km/h) with higher gusts up from 40 mph yesterday; little change in strength is expected during the next 48 hours.

Tropical storm force winds extend outward up to 105 miles (165 km), mainly to the north and east of the center.

All airports in the U.S. Virgin Islands will be closed to incoming flights until Friday, and government offices are closed today as well, according to Gov. Kenneth Mapp.

“This is a fast-moving storm, and so we expect conditions to deteriorate rapidly,” Mapp said.

A tropical storm warning is in effect for the U.S. and British Virgin Islands, Puerto Rico and the northern Leeward Islands.

The storm is expected to drop one to two inches of rain on drought-stricken St. Croix.

The weather associated with Danny only brought about an inch of rain to the Virgin Islands.

The island of Dominica reported that 8.86 inches of rain fell in six hours during the passing of Tropical Storm Erika.

Authorities in the nearby Dutch Caribbean territory of St. Maarten said schools and government offices would close Thursday. They also asked that casinos, restaurants and other businesses close by midnight Wednesday. Officials warned they might temporarily suspend power and water service as the storm approaches.

The hurricane center said Erika would move near Puerto Rico and the Virgin Islands on Thursday and be near or just north of the Dominican Republic on Friday.

Tropical storm warnings were issued for Puerto Rico, the U.S. and British Virgin Islands and the Leeward Islands yesterday.

A tropical storm watch was in effect for the northern Dominican Republic, the Turks & Caicos Islands and southeastern Bahamas.

For more information please click on the following links: 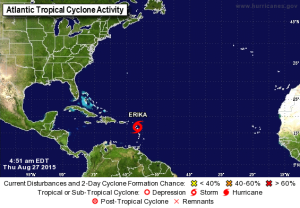 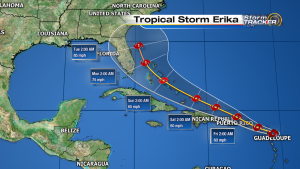