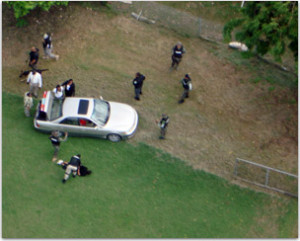 FREDERIKSTED – People who live in Bethlehem Village and Profit Hills also known as Harvey Project in Machuchal were already on edge after two shootings took place in the space of two weeks there in August.

So a report of gunshots being discharged today at about12:41a.m. did not calm there nerves any.

The 911 Emergency Call Center dispatched police to Bethlehem Village and Profit Hills commonly known as Harvey Project in Machuchal in response to reports of gunshots being fired, according to the Virgin Islands Police Department.

Police searched three areas of the housing community where gunfire had been reportedly heard, the VIPD said. Forensic Technicians combed the areas with police and recovered several spent casings and an SUV that had been shot by bullets.

On Monday afternoon, shots rang out in broad daylight at Harvey Project and the result was that a 27-year-old man was non-fatally injured.

The 911 Emergency Call Center dispatched police at 1:45 p.m. Monday August 31, 2015 to a private residence in Estate Williams Delight to respond to a call that a man had been shot.

Arriving in Williams’s Delight, police met with a man who told them that he had been shot in Bethlehem Village and Profit Hills (commonly referred to as Harvey Project), police said.

According to man’s account to police, he was driving out of Bethlehem Village and Profit Hills (Harvey Project) when he suddenly heard shots fired at his vehicle, which sustained damage from the gunfire. The man said that he hadn’t noticed anyone in the area when the shots rang out.

Police and members of the Forensics Unit cordoned off and examined the area of Bethlehem Village and Profit Hills where the victim was shot and were able to gather several spent shell casings.

Police spoke with various people in the area, but they were unable to provide any helpful information regarding the shooting.

The man who was shot was taken to the Juan F. Luis Hospital and Medical Center by ambulance and was treated for a gunshot wound to the lower leg (shin region).

Meanwhile on August 14 police investigated a report of a man who said he was shot as he left the Harvey housing community just after midnight.

Police were dispatched by the 911 Emergency Call Center at 12:01 a.m.  to the Juan F. Luis Hospital and Medical Center to investigate the report of a shooting man seeking treatment for a gunshot wound, the VIPD said.

Officers met with the man who said that as he was driving out of the Harvey housing community in Estate Profit, a person or persons unknown to him fired shots at him. Realizing that he had been shot, he drove himself to the St. Croix hospital for treatment.

The shootings are under investigation by detectives with the Criminal Investigation Bureau, police said.