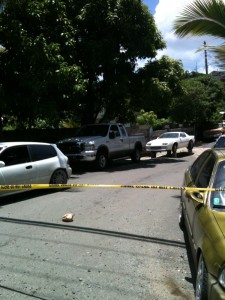 CHARLOTTE AMALIE – An early morning argument in the Sanchez Town part of Nadir led one man to grab a rock and strike the other man in the head with it, leaving the injured man dead Tuesday, according to the Virgin Islands Police Department.

Police were dispatched to that area about 1:35 a.m. September 22 on a report of an assault when they found the lifeless body of 56-year-old Ellmeade Daniel Sr., the VIPD said.

Daniel was lying on the ground with a cut to the left side of his head when police arrived, according to the VIPD.

A police investigation revealed that Mario Brown argued with Daniel about 1 a.m. in Sanchez Town. When the argument turned heated, Brown picked up a rock and struck Daniel in the head with it, the VIPD said.

Daniel was pronounced dead at the scene.

Brown, 51, of Estate Nadir was arrested and charged with first- degree murder and third-degree assault.

No was bail set for Brown because of the seriousness of the charge against him.

He was remanded to the Bureau of Corrections pending an Advice of Rights hearing.

When The Moon Hits Your Eye Like A Big Pizza Pi, That's Amore!