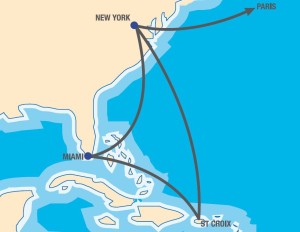 WASHINGTON – The FCC proposed new rules that would require submarine cable operators to report outages to the regulator, an initiative that seeks to hold operators more accountable.

Despite the role that submarine cables play in America’s economic and national security, operators are only required to report outages on an ad hoc basis, a method that the FCC says provided little insight.

With its proposed rules, the FCC wants submarine cable operators to provide timely information on outages.

The FCC said operators would have to give the regulator detail on the nature and impact of any damage and disruption to communications, help mitigate any impact on emergency services and consumers, and assist in service restoration. By providing more detailed information on submarine cable outages, the agency would be able to achieve three goals: identify trends, address systemic issues and inform policy making.

In the NPRM it adopted, the FCC wants comments on a proposal that submarine cable operators report major outages where connectivity or degradation on an undersea cable’s capacity of at least 30 minutes. Working in conjunction with the Public Safety and Homeland Security Bureau, the International Bureau will develop and improve interagency coordination to facilitate deployment of this critical infrastructure.

These new rules emerged after a major outage took place on IT&E’s submarine cable in the Commonwealth of the Northern Mariana Islands in July, leaving residents and businesses without the ability to make credit card transactions or withdraw money from ATMs. IT&E, a subsidiary of PTI, invested $14 million in 1997 to lay an undersea fiber-optic cable that links the CNMI and Guam, and from Guam across the Pacific.

Mignon Clyburn, FCC commissioner cited the recent Northern Mariana Islands outage as something that it hopes to avoid in the future.

“To add insult to injury for those in the commonwealth of the Northern Mariana Islands is the fact that the agency responsible for ensuring continuous communications and reliability of the nation’s public communications infrastructure only learned of their plight through indirect channels,” Clyburn said. “Even if we had directly learned about the outage, the commission realized it had no reliable owner and operator contact numbers, no information of the outage impact or restoration, and this left staff at a disadvantage with any opportunity to help to restore those critical services for those citizens.”

Commissioner Michael O’Reilly, while voting to approve the NPRM, added that he thought the strict liability captures too many people, the cost estimates are low in terms of filling out material, and the root cause issue needed to be amended.

“These cables are sitting at the bottom of the ocean and I expect many providers won’t know the cause of the issue in a timely fashion so we have to address that fact going forward,” O’Reilly said.

IRS: Insurance Companies Must Tell The Government If You Have Catastrophic Insurance