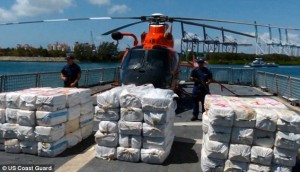 MIAMI – At least 4,000 pounds of recently-seized drugs, worth some $11 million, was offloaded Friday by the Coast Guard at its base in Miami Beach.

According to the Coast Guard, the 559 pounds of cocaine and 3,662 pounds of marijuana were confiscated during two separate seizures earlier this month as part of the ongoing Operation Martillo which means “Operation Hammer” in English.

At least eight bales of marijuana washed ashore Thursday near the Martin and Palm Beach County boundary line, according to the U.S. Border Patrol.

At least eight bales of marijuana washed ashore Thursday near the Martin and Palm Beach County boundary line, according to the U.S. Border Patrol’s Adam Sacasa.

“That’s $11 million dollars worth of drugs that won’t reach the streets of New York, Chicago, Miami or the Central Caribbean,” Cmdr. Timothy Cronin, deputy chief of law enforcement for the Coast Guard’s 7th District, told reporters near a dock stacked with bales of bundled marijuana and cocaine.

The cocaine was seized on Sept. 3 southeast of Nicaragua after a maritime patrol aircraft spotted a suspicious Panamanian-flagged vessel, officials said. A boarding team from the Coast Guard Cutter Robert Yered found the cocaine, with a wholesale value of $8.5 million, in a hidden compartment, the agency said.

The two people aboard the vessel were taken into custody in Tampa on Sept. 12.

Also on Sept. 3, the Coast Guard received a report of three people clinging to a capsized vessel off the coast of Jamaica, the agency said. The Coast Guard says the cutter Vigilant arrived at the scene and rescued the three people. While heading toward the capsized boat, crew members found 68 bales of marijuana floating in the water.

The marijuana has an estimated wholesale value of $3.3 million, according to the Coast Guard.

On Friday, Sept. 18, 2015, crewmembers of Coast Guard Station Miami Beach offloaded 254 kilograms of cocaine and 3,662 pounds of marijuana interdicted in the Caribbean Sea as part of Operation  Martillo worth an estimated wholesale value of $11.8 million, at Base Miami Beach.

“We all know what drugs can do to young children and people, we see it every day in hospitals and rehab centers and prisons and we have to get after that,” Cronin said. 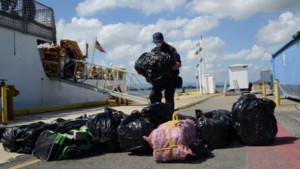