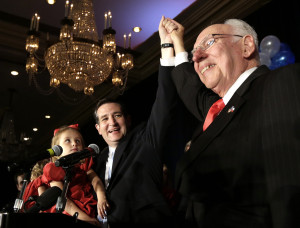 CHARLOTTE AMALIE – Ted Cruz is known as a right-wing troublemaker, but he is tame compared to his dad. Here are a few of the craziest things Rafael Cruz has uttered on public stages in the last year.

Texas’ junior senator and 2016 presidential prospect, Ted Cruz, has made quite a conservative name for himself in a year. Just last month, he helped to engineer a government shutdown and won the far right-wing Values Voter Summit straw poll.

His father, Rafael Cruz, is just as much of a troublemaker but may turn out to be more of a hindrance than a help in the senator’s presidential bid. An evangelical Texas pastor armed with an inspirational (though questioned) story of escaping Cuba’s Castro regime, he often speaks to the religious and conservative base. And he doesn’t shy away from the controversial.

A Cruz spokesman told Mother Jones, “Pastor Cruz does not speak for the senator.” But after hearing the elder Cruz speak earlier this year, Glenn Beck said, “It’s easy to see that the fruit doesn’t fall far from the tree in the Cruz household.”

Based on Pastor Cruz’s words, that fruit is bitter. In the last year, Rafael Cruz has given dozens of speeches and interviews that make some far out, often offensive assertions. The Virgin Islands Free Press collected some of his craziest quotes and sentiments.

Rafael Cruz had a birther moment last year at a gathering of Texas Tea Partiers. “We have our work cut out for us,” he said. “We need to send Barack Obama back to Chicago. I’d like to send him back to Kenya, back to Indonesia.” He went on to say, “We have to unmask this man. This is a man that seeks to destroy all concept of God. And I will tell you what, this is classical Marxist philosophy. Karl Marx very clearly said Marxism requires that we destroy God because government must become God.”

Claim: The government is going to take all of your money and Obama has no problem with murder. April 25, 2013 Hood County, Texas

In a speech before the local Tea Party, Cruz likened the United States under President Obama to Cuba under Castro, warned that the Obamacare “death panels” are coming, and said the government, which he called a “wicked rule,” wants to confiscate “our fortunes.”

Cruz went on to lie about Obama’s record on abortion. “Do you realize,” he asked a room of conservatives, “the first bill President Obama signed into law was to legalize third trimester abortions?” Then, referring to Kermit Gosnell, the abortion provider convicted of murdering babies this year, Cruz said, Obama “probably doesn’t have any problem with what this butcher in Philadelphia is doing.”

In his State of the Union address, Obama said that if Congress refused to act on climate change, he would “direct my Cabinet to come up with executive actions we can take, now and in the future, to reduce pollution, prepare our communities for the consequences of climate change, and speed the transition to more sustainable sources of energy.” These words, Cruz said, are “the most ominous words I’ve ever heard.” Over shouts of “Tyranny!” Cruz said, “Not much different than that old bearded friend that I left behind in Cuba, governing by decree, by executive order, just like a dictator, like Fidel Castro.”

Claim: The media is evil and wants to destroy this country. October 17, 2013 Interview with Glenn Beck

Rafael Cruz told Glenn Beck that the U.S. has its very own “ministry of misinformation” that governments in communist countries like Cuba employ to spread their messages. That propaganda machine, he said, is the liberal media. “They just tell us what they want us to hear. They are rewriting history…because they have an agenda. And unfortunately the agenda is an evil agenda. It’s an agenda for destroying what this country is all about,” he said.

Gay marriage, Cruz asserts, is a government plot to destroy the family and institute its socialist agenda. “Socialism requires that government becomes your god. That’s why they have to destroy the concept of God. They have to destroy all loyalties except loyalty to the government. That’s what’s behind homosexual marriage. It’s really more about the destruction of the traditional family than about exalting homosexuality, because you need to destroy, also, loyalty to the family.”

Because of Obama’s excessive regulation, Cruz says “the oil industry is stifled” and claims, “We are buying 40 percent of our oil from our enemies…Our enemies control the energy that we use or do not use.” And they have the power, he said, “to shut down the valves and bring us to our knees.” In truth, while the U.S. does rely on foreign sources for about 40 percent of our oil, about half of that amount comes from the Western Hemisphere, and the largest supplier is our ally, Canada, according to the Energy Information Administration.

Rafael Cruz, a 76-year-old Cuban who fled the Batista regime in the 1950s, is a super-surrogate on the presidential campaign trail for his son.

He is a practiced speaker who brings evangelicals to their feet—a powerful weapon for his son in one of the fiercest battles within the Republican nomination contest: The fight for voters on the religious right.”

For the Cruz campaign, relying on the candidate’s father carries some risk. Rafael Cruz’s passionate Bible-laced rhetoric and provocative conservative barbs could alienate swing voters the Texas senator needs to broaden his appeal.

When Pigs Fly! Jet-Setting 'Ziggy The Piggy' Raises Eyebrows When He Gets To The Mainland