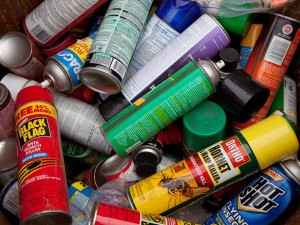 WASHINGTON – Pesticide use in homes may increase the risk of children developing leukemia or lymphoma, a new report suggests.

Researchers combined data from 16 earlier studies that had compared pesticide exposure between children who developed leukemia or lymphoma and those who did not. These studies estimated the level of insecticides and herbicides both inside the home and in the yard and outdoor residential space. This is why should identify professional and careful pest control services before hiring them, such as pest control in Des Moines.

“Childhood cancers are increasing year by year in this country, (and) there is disagreement about what is contributing to that, but pesticides have always been on the radar,” said Chensheng Lu, an associate professor of environmental exposure biology at the Harvard T.H. Chan School of Public Health who led the new research. The study will be published in the October issue of the journal Pediatrics.

This analysis “is confirming that pesticides may play a role, possibly a significant role, in the development of childhood leukemia and lymphoma,” Lu said. However, he added that it is hard to say at this point if exposure to these chemicals is definitely a risk factor for these cancers.

The association between pesticides and cancer risk is not necessarily limited to leukemia and lymphoma, either, Lu said. Pesticide exposure may also drive up the risk of other types of cancers, such as prostate and bladder, but they have not been studied as much, and are more difficult to research because they take longer to develop, he said. If childhood pesticide exposure helped trigger the onset of these other cancers, they might take many years, possibly into adulthood, to manifest.

The fact that the study found an association between only indoor use of insecticides and increased rates of cancer makes sense, Lu said, because there is less fresh air indoors to dilute the chemicals. And insecticides could be particularly damaging because they are sprayed around the home, whereas herbicides are usually used only around plants, he said.

Children can be exposed to pesticides by breathing them in or eating them, Lu said. Chemical residues linger on surfaces where children play or spend time, and they may get them on their hands and put their hands in their mouths. In general, children younger than age 12 appear to be most vulnerable to the possible cancer-causing effects of pesticides.

“We are starting to get to the place where there is enough science, it just starts to add up to say that we can’t really ignore anymore … the role of environmental factors like pesticides in health,” said Dr. Catherine J. Karr, professor of pediatrics and director of the Pediatric Environmental Health Specialty Unit at the University of Washington.

“This study is a nice contribution because it focuses in on what is the effect of home use of pesticides versus (other) exposures.”

Other research has suggested a link between parents who are exposed to high levels to pesticides at work, such as through farming, and increased rates of cancers such as leukemia and lymphoma, both in these adults and their children.

Although the current study confirms the findings of earlier studies, it is not possible to show definitively that pesticides increase cancer risk through this type of research, which is based on linking cases of disease with exposures, said Dr. James R. Roberts, professor of pediatrics at the Medical University of South Carolina. But researchers can generally make an argument for pesticide exposure being a culprit in disease by showing a strong association in many different studies, and also by suggesting ways that this exposure could be causing the disease.

“There are not many studies (and) we hope that by publishing this paper we will encourage more scientists to conduct more research,” Lu said.

In the meantime, parents can take precautions to reduce their exposure to pesticides. The most effective way is to prevent pests in the first place, by cleaning up old food, and repairing cracks and crevices through which insects can enter, Lu said.

If the pests have already taken over, try non-chemical means first to wipe them out, such as using diatomaceous earth, a powder made from fossilized earth that dries out insect exoskeletons, Lu said. If parents feel they have to use chemicals, opt for bait strips rather than sprays that get everywhere, Lu said.

The U.S. Environmental Protection Agency offers tips on safe pesticide use. These include not using more than the amount recommended on the label, and removing children, pets and toys from the area sprayed until after the pesticide has dried, or for as long as the label recommends.

Some of the studies that Lu and his colleagues included in their analysis suggest that rates of cancer were highest among children who were exposed in the womb and among those whose parents were exposed before they were conceived. “Women who are pregnant or intend to become pregnant can avoid home insecticide application,” said Roberts of the Medical University of South Carolina.

Although it is too soon to say unequivocally whether pesticide exposure increases the risk of childhood cancers, there is stronger evidence connecting these chemicals with neurological consequences, such as lower IQ and attention deficit hyperactivity disorder, Karr said.

Pesticide exposure has also been linked to headaches, nausea, skin irritation and other symptoms, according to an American Academy of Pediatrics policy statement on children’s exposure to pesticides, which Roberts and Karr wrote. This just shows how important it is to hire a reliable, safe pest control company, such as Terminix termite control. If you choose the wrong company, the results could be disastrous.

A study to be published in the October issue of Pediatrics along with Lu’s research raises the possibility that high doses of pesticide may even lead to sudden infant death. A post-mortem analysis by researchers in Italy of a 7-month-old girl who had died in her sleep revealed high levels of a pesticide called DBNP in the brain tissue. The girl may have inhaled the chemical after her father sprayed insecticide around the house to kill flies in the two weeks before her death.

“This single incident would be reflective of acute toxicity. Pesticides play a role in acute and chronic health problems depending on the level of exposure,” Lu said. “If you can measure residue in this kid’s brain, then she was probably exposed to a very significant level of pesticide.”

The health effects of pesticides have made more headlines recently. Earlier this month, a Florida family fell ill and a 10-year-old boy was hospitalized after termite fumigation in their home. In March, a Delaware family vacationing on St. John in the Virgin Islands, fell ill after a suspected pesticide exposure. The family is still suffering health consequences. 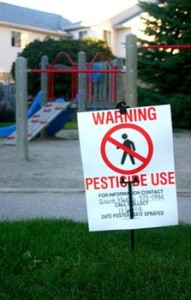 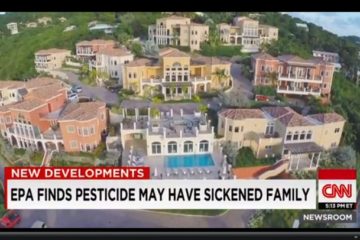 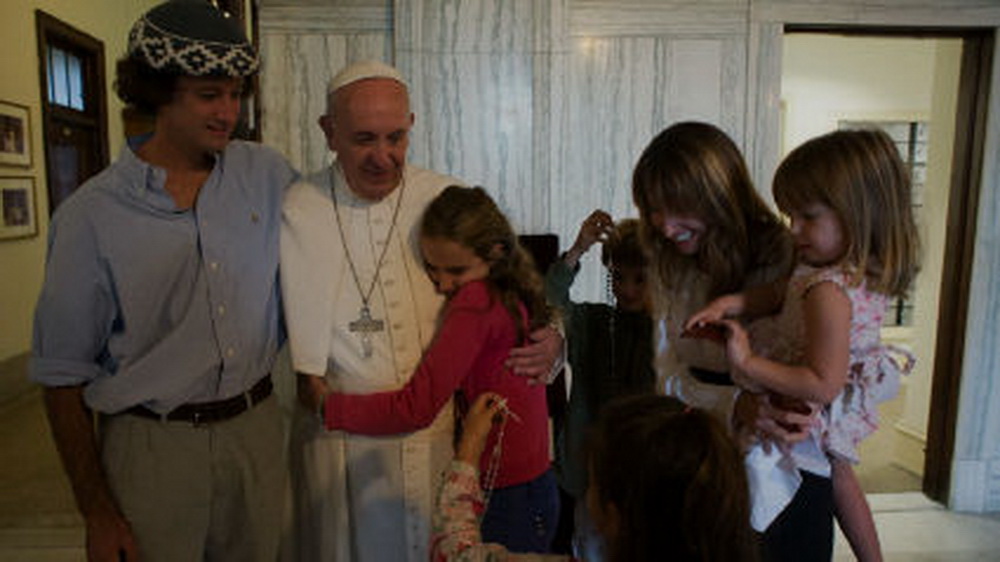 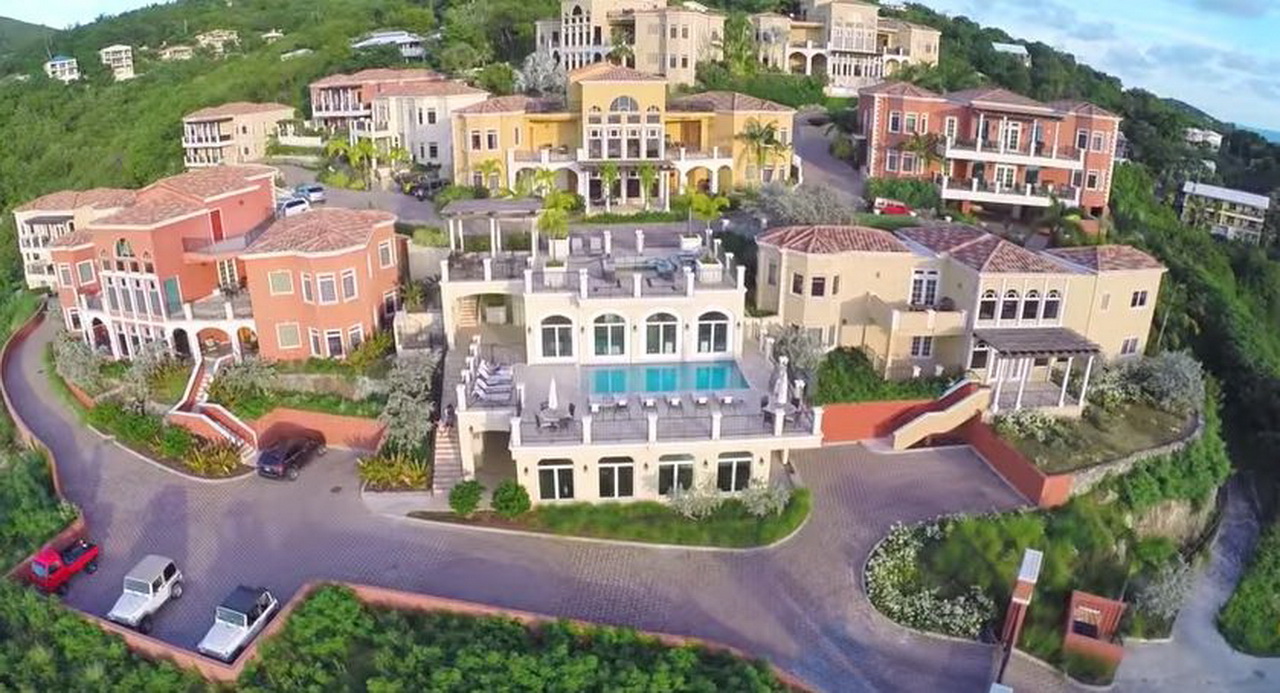