Thanks to El Niño, This Year’s Hurricane Season Has Been A Bust, So Far 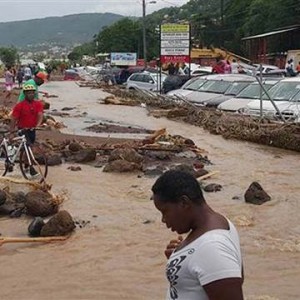 MIAMI – This year’s Atlantic hurricane season has had more named storms than last year already, but overall the severity of tropical weather has been weak — thanks in part to El Niño, forecasters say.

The Atlantic hurricane season typically produces six to 11 named storms, forecasters with the National Oceanic and Atmospheric Administration’s Climate Prediction Center said. So far seven have been produced this year.

Forecasters predicted at the beginning of the season – which started one month early in May with Tropical Storm Ana – that we could expected three to six storms to become hurricanes.

So far, there has been only two hurricanes (Category 3 Danny and Category 1 Fred), but Tropical Storm Erika has done the most damage by far when the late August system killed 20 in Dominica.

Both estimates are below the median — about 12 named storms and 6.5 hurricanes, according to Colorado State University’s Tropical Meteorology Project.

What has been holding hurricane formation back? That would be warm waters in the ocean to the west and dry sheering winds in the upper atmosphere, said Gerry Bell, NOAA’s lead hurricane season forecaster.

The phenomenon known as El Niño is back in play again this year. The event, involving the warming of water in the equatorial Pacific, increases strong wind shear in the Atlantic – which has served to beat storms down even when they were headed our way.

“What El Niño does is it suppresses the hurricane season, mainly during the peak months of the season, which are August, September and October,” Bell said.

The outlook does not predict how many storms will hit land. Bell warned that the forecast shouldn’t lull people in coastal areas.

“Six to 11 named storms is still a fair amount, so we should still stay prepared” to evacuate if ordered, he said.

NOAA pointed to 1992’s Hurricane Andrew, which was one of only seven named Atlantic storms that year. It devastated South Florida, killing at least 26 people and causing $26.5 billion in damage.

The Atlantic hurricane season runs though November 30. The region includes the Caribbean Sea, the Gulf of Mexico and the north Atlantic Ocean.

Fraudster From St. Thomas Cheated Elderly Out of Millions With Insurance Scam

Thanks to El Niño, This Year’s Hurricane Season Has Been A Bust, So Far