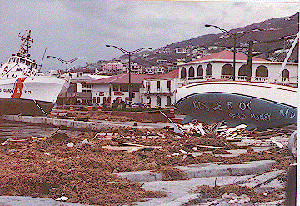 MIAMI —For some, hurricane season is viewed as a mountain with an elevator awaiting on the other side. You climb to the top and it’s easy going on the way down.

But, that’s really not how it works.

“It’s a bell curve. It’s a well-rounded mountain. That’s a better way to look at this,” said Ed Rappaport, the deputy director of the National Hurricane Center in Miami.

Sept. 10 is only a threshold for the season. The threat yesterday, and the threat tomorrow, is the same as today.

As a matter of fact, statistically, the threat for tropical systems to impact the Virgin Islands and Puerto Rico goes well beyond this peak day.

“And it really is. You look at early August through the middle of October — that’s when we have the best chance for some of the strongest storms in the Virgin Islands,” Rappaport said.

Tropical development in October seem rather late, but it’s nothing new.

“You go back in history — even one documented from the 1500s which occurred in late October in the Virgin Islands. So we’ve had about 20 systems in October for the entire territory. So, we gotta be prepared for the whole season. We’ve got a little ways to go,” Rappaport said.

Systems like Danny and Erika had a ways to go when they first developed off of Cape Verde in Africa, giving us plenty of time to watch for changes and refine forecasts accordingly. But even with the impacts of El Nino this year, we’re not always granted the gift of extra time.

“History shows us that the best place to look at, really, lessons learned from hurricanes is to go back in time. We look at Marilyn (September 15-16, 1995), we look at Omar (October 16, 2008), we look at Lenny (November 17, 1999), there’s all sorts of examples of storms impacting the Virgin Islands late in the calendar year,” Rapapport said. “So, there’s really no such thing to me as a busy season or not a busy season. You have to prepare the same as if we were going to be threatened by a hurricane.”

Head of the Fed: Employment Has 'Steadied' In The Virgin Islands and Puerto Rico Despite 'Deep Economic Slump'