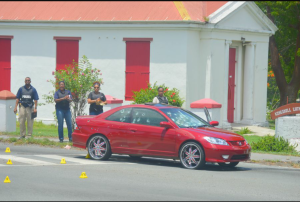 The scene of the shooting on Saturday

FREDERIKSTED – For the third time in seven days, a man has been found riddled with bullets in the front seat of his vehicle, according to the Virgin Islands Police Department.

The 911 Emergency Call Center received a report of shots fired at 9:12 p.m. Thursday and dispatched police to a bus shanty in Campo Rico, the VIPD said.

Responding officers arrived at the location and discovered a black Isuzu Rodeo, with an unresponsive black male in the drivers’ seat with multiple gunshot wounds to his body.

Emergency Medical Technicians were contacted and once they arrived on the scene and checked the individual, no signs of life were found.

The man’s name will not be released until notification of next of kin, police said.

Police said they have no information on the suspect(s) involved in this latest shooting and police are asking that anyone with information on this homicide to contact the Criminal Investigation Bureau at (340) 712-6024 or 911.

On Saturday about 11 a.m. a man was found mortally wounded near the Kingshill Lutheran Church at mid-island.

The day before, reputed gangster Jermaine “Bird” Williams was slain in a hail of high-powered gunfire as he waited in his SUV to pick up his child from daycare in Estate Whim, Frederiksted.