When Pigs Fly! Jet-Setting ‘Ziggy The Piggy’ Raises Eyebrows When He Gets To The Mainland 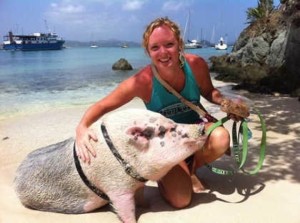 CRUZ BAY – About a year ago, Kristin Hartness and Jay Yontz, and their 5-year-old pig Ziggy, found themselves in quite a pickle.

The home they’d been renting for years on St. John had been sold, and the trio was having a tough time locking down substitute accommodations.

“We tried very hard to find a new place to rent. But as you can imagine it’s not easy to find a place that will rent to people with a 250-pound pig,” Hartness said.

So the couple and their big porcine baby did what they felt was their best option:  They chartered a plane to the mainland to the tune of about $14,000, bought a motor home, and then headed out on the adventure of a lifetime.

“We aren’t rich but chartering was in fact the only option we could find,” Hartness said. “The choice between that and getting rid of him was a no-brainer.”

Moving like this is just one of the unplanned-for things in this family’s life.

Five years ago, when Hartness was looking to acquire a pet pig, she found Ziggy — listed for sale as a teacup pig who was never going to get large. Like just about every animal who’s been advertised as such, this turned out to be an utter fiction, and he soon got extremely large.

Lucky for Ziggy — well, really, lucky for everyone — the piggy’s human parents were besotted.

“He is our boy and no matter what happens he will always be by our side,” says Hartness, who dreams of opening an animal sanctuary for pets like Ziggy, except whose families aren’t in a position — or aren’t inclined — to comport their lives around a pig.

On the island, being by Hartness and Yontz’ side meant daily walks on the beach, lots of swimming and regular sessions at a local bar where Ziggy was a big cheese — he’d sometimes even have to sneak off to “the quiet side of the island” to get some private time, away from his fans, Hartness says.

A smart, naughty, stubborn pig, Ziggy would also get himself into trouble with some regularity. He liked to sneak out of the house and take himself for a dip at a nearby bay, for example.

One time, Hartness recalls, Ziggy infiltrated a neighbor’s house, where the doors had been left open. Ziggy knows how to open refrigerators and was making his way into the kitchen.

Hartness  tried calling Ziggy out, with no success. She had no choice — really, no choice at all — but to sneak into the house herself, “and grab some chips they had left out and as quietly as possible lead him back over to our house,” she says. “Thankfully we made it out without anyone waking up. This is just one of many mischievous Ziggy stories.”

It was a good life, that Hartness, a former banker turned bartender, and Yontz, who designs tennis courts, had a hard time leaving behind.

Thank pig, it’s been good since they left, too.

They all flew into Florida last October, then picked up some wheels and set off to see what the world had in store back on the mainland.

“Our plan was to figure out a plan. Still hasn’t happened yet but we’re still working on it,” says Hartness.

The group’s been as far south as Key West, and up the East Coast to North Carolina. They’ve ventured west to Colorado, and Idaho and Wyoming, where Yontz has had some work.

Every day, they try to find some body of water so Ziggy can go for a swim. They often go for hikes, where Ziggy “maintains an impressive pace,” says Hartness. Not infrequently, a stop will be made so Ziggy can chow down on a favorite treat: pancakes and fruit.

Like on the island, folks often mob Ziggy for photos and questions. Ziggy’s made the local papers and a number of his new appreciators have said that meeting him has convinced them to stop eating pork, which Hartness — a vegetarian — appreciates. There’s the occasional negative remark, but that’s just life.

Sure, there are challenges. For instance, it turns out fussy Ziggy really doesn’t like riding in the RV. So now Yontz pilots the motor home, while Hartness and Ziggy drive their own SUV. (Something that’s been less challenging than expected: restaurants and hotels that are dog-friendly are surprisingly amenable to pigs as well, Hartness has learned, if you call ahead.)

Hartness believes the rewards are greater than any difficulty she’ll encounter, sharing this unusual existence with her great big lovable pig.

“Ziggy completes my life,” she says. “Seeing fat boy running on trails and swimming in lakes, rivers and in the ocean makes everything worth it. If he’s happy, we’re happy.”

By the way, if you’ve got ideas about pig-friendly destinations where Ziggy and his humans should go for the winter, they’re all ears (with a bit of snout and some curly little tail).

Warmer climes are preferred, but colder options aren’t off the table if the spot is otherwise ideal.

Big Z has “two winter jackets that he loves to wear,” Hartness says — and he still loves the water when the temperatures drop. “Even the cold weather won’t keep my kid from swimming!” 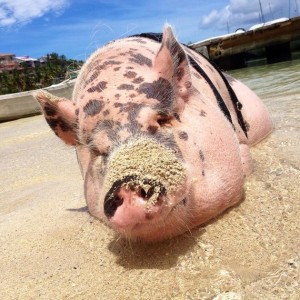 Life’s a beach for Ziggy The Piggy

When Pigs Fly! Jet-Setting ‘Ziggy The Piggy’ Raises Eyebrows When He Gets To The Mainland