ANOTHER BOONDOGGLE: High-Flying Mapp At The Southern States Energy Board Meeting 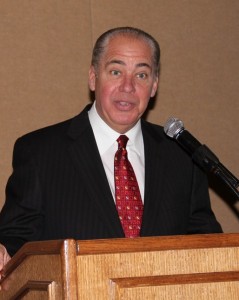 WHITE SULPHUR SPRINGS, W.V. – The Greenbrier resort in White Sulphur Springs played host this week to more than 200 members of the Southern States Energy Board (SSEB) who convened for the organization’s annual meeting.

West Virginia Gov. Earl Ray Tomblin welcomed the attendees to the Mountain State and presided over the annual meeting as chairman of the SSEB, an organization of southern governors and state legislators from 16 states, the Virgin Islands and Puerto Rico.

“Gov. Tomblin always enjoys showcasing West Virginia to those who may not have ever had the opportunity to explore all that’s wild and wonderful about our state,” Tomblin’s press secretary Shayna Varner said.

The three-day annual meeting boasted the theme “Producing America’s Energy and Power,” and focused on the role of the southern states in “leading the nation toward international energy partnerships and technology deployment,” according to information available at the meeting.

“For our nation to thrive in the global marketplace, we must recognize how important our energy resources are to growing the economy and creating the jobs that are vital to each of our states,” Tomblin said.

Beginning with an executive committee meeting and opening reception on Sunday, the SSEB’s annual meeting revolved around a series of panel discussions and presentations by federal and state officials and energy industry leaders.

Topics ranged from “The American Shale Revolution” and “Advancing Technologies to Harness Our Domestic Energy Abundance” to “Nuclear Energy and the Clean Power Plan.”

“The Southern States Energy Board provides key players from across the region with the opportunity to sit down and discuss a number of energy issues important to our states,” Varner said. “As the nation’s leader in energy creation, this year’s SSEB annual meeting focused on ways to position the southern states as a world leader in energy production through a solid infrastructure, strengthening our advanced manufacturing industry and working together to create a skilled employee base through ongoing workforce development efforts.”

In addition to West Virginia, the SSEB’s members are Alabama, Arkansas, Florida, Georgia, Kentucky, Louisiana, Maryland, Mississippi, Missouri, North Carolina, Oklahoma, Puerto Rico, South Carolina, Tennessee, Texas, Virginia and the Virgin Islands. Each jurisdiction is represented by the governor and a legislator from the House and the Senate.

The resolution further asserts that the plan “interferes with the sovereign powers of the states to regulate electricity within their borders and to ensure a reliable and affordable supply of electricity for their citizens,” and posits that the plan may be overturned by legal challenges in multiple states.

The SSEB adopted the resolution during Monday’s business session.

East Coast Hospitals Band Together With V.I. and P.R. To Cut Costs

ANOTHER BOONDOGGLE: High-Flying Mapp At The Southern States Energy Board Meeting