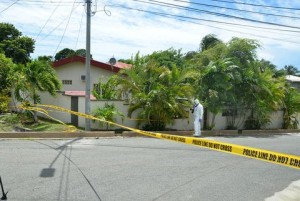 CARNBEE, Tobago – Britain’s ambassador to Trinidad and Tobago called for swift action following the brutal murder of British national Richard Wheeler and his wife, Grace in the quiet village of Carnbee on Tuesday.

Richard, a 72-year-old attorney from Sheffield, U.K. who has been living on the island for the past 16 years and his wife Grace, 63, a real estate agent, were discovered hacked to death at their Riseland Gardens home by a yard attendant about 11 a.m. Tuesday.

The attendant reportedly found Grace lying on her back on the property’s lawn while her husband was found in the living room.

Police who were at the scene described the act as “gruesome and very bloody.” A senior officer said Grace’s throat was slit, while Richard received several machete chops about the body.

Authorities believe robbery may have been the motive as the house was ransacked.

Neighbors said the couple was robbed seven times in the past, the most recent being earlier this year. The house, however, is also outfitted with an alarm system monitored by Blink Vigilance and the couple had dogs.

The couple was last seen alive on Monday evening by neighbors.

Wheeler was a partner at top regional firm Lex Caribbean and specialized in conveyance and property law, while his wife worked with Island Investments.

The killing sent shockwaves in the quiet, middle-class village, with many residents expressing concern over not only these killings; but, the latest spate of gun-related killings on the island.

One resident, who spoke on condition of anonymity, said more police patrols were needed in the area.

“This situation is very frightening. They were quiet people…nobody’s business…and look what happened to them. The whole community is out here as we speak because this isn’t a normal thing. Some people get break-ins and we try to look out for one another but we need more help from the police. We need more patrols, especially officers on foot and riding their bikes like long time.”

“The complexion of Tobago is changing, not that it is becoming crime-ridden but everybody needs to be more alert, more receptive, be aware of your surroundings and be aware of people who you allow into your place, both as tenants and cleaners as the case may be,” Nelson said.

Attorney Martin George said Crime Stoppers was offering a reward for information that could help solve the murders.

“In my capacity as the (Tobago House of Assembly) representative on the board of Crime Stoppers, I have been able to get the board to agree to offer a special reward of $100,000 for information leading to the arrest and capture of the suspects in this matter,” George said.

Plenty of machete attacks on expats living in Tobago

Since 2008 there have been seven other cases of expatriates being chopped in Tobago.

Their bodies were found approximately one mile east of the beach, near the mouth of the river at Bacolet Bay.

In November 2009, the body of German national Peter Taut was found in a shallow grave in the yard of his home at Bacolet Crescent. He was found with his hands and feet bound and he was gagged with duct tape.

Earlier that year, in August, Murium and Peter Green were chopped by an assailant and left for dead, but luckily survived the attack. They lived a few houses away from Taut in the same neighbourhood. They now live with some physical disabilities.

Clint Alexis, of Argyle, Tobago, was charged with the attempted murder of the Greens, and was also assisting police with information for Taut’s murder. However, he was cleared of charges in 2011 due to insufficient evidence. Peter Green, in an email, also accepted that Alexis was not their attacker.

In October 2008, Swedish couple Anna Sundsval, 62, and her companion Oke Olsoon, 73, were chopped to death in their villa on Anthony Charles Crescent, Bon Accord Estate Development, in west Tobago.

To date, no one has been found guilty of any of these machete attacks on foreigners.

'Slow' Figueroa-Serville Admits To Impetigo Outbreak One Day After The V.I. Freep Reports On It