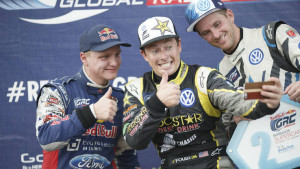 Tanner Foust (middle) hams it up after winning

Foust swept the weekend at Bushy Park Barbados, winning over second-place finisher Speed in both the Saturday and Sunday races. Longtime championship leader Ken Block crashed out of the last-chance qualifier on Saturday, taking the face of Hoonigan Racing Division — and eventually, the entire rest of the field — out of title contention with one race remaining.

Block managed to retain the championship lead for much of the season, but Speed took over the top spot after Saturday’s event and now unofficially sits at 412 points to Foust’s 376.

Foust got out front immediately in the first main event of the weekend, with teammate Speed staying ahead of the Ford Fiesta ST of Patrik Sandell for second position during much of the event.

Sandell made contact with Speed exiting the joker on the final lap, knocking the Volkswagen’s wheel off and causing Speed to crawl across the line in third.

Officials later issued a penalty to Sandell, dropping the driver down to 10th in the finishing order and moving Speed into second on the podium.

Both Foust and Speed started on the front row for Sunday, and Foust held off charges from his teammate in order to take a second win in a row – it was also Volkswagen’s fourth consecutive victory, with Speed sweeping the most recent doubleheader in Los Angeles. Nelson Piquet Jr. won the battle for third against reigning champion Joni Wiman, taking the final spot on the Sunday podium. 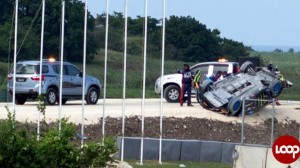