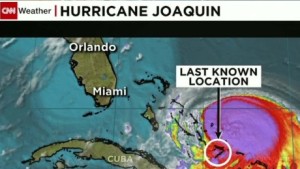 CHARLESTON, S.C. – Aircraft have returned to the southeastern Bahamas to resume the search for a U.S. cargo ship with 33 people on board that got caught in Hurricane Joaquin.

The Category 4 storm ripped off roofs, uprooted trees and unleashed heavy flooding as it hurled torrents of rain across the eastern and central Bahamas on Friday, and the U.S. Coast Guard said it was searching for a cargo ship with 33 people aboard that went missing during the storm.

The U.S. Coast Guard released a video Sunday showing the recovery of a life ring confirmed to be from El Faro. It has not been retrieved.

The ship left Jacksonville, Florida on Thursday and was headed to San Juan, Puerto Rico before reportedly losing power and taking on water while sailing through 20 to 30-foot waves.

Coast Guard officials said the search, across about 850 square nautical miles of ocean, had to be called off Friday because of darkness.

Maj. Marnee Lasurdo told the Sun Herald of Biloxi that the two C-130 crews were studying the storm on Thursday when the Coast Guard asked their help.

The Miami-based National Hurricane Center said about 5 a.m. Saturday that a hurricane warning has been issued for Bermuda by that country’s weather service and damaging winds are expected later in the day.

On October. 1, authorities received a satellite notification saying the vessel had lost propulsion and was listing in hurricane conditions off Crooked Island, Bahamas.

Maritime Puerto Rico said a contracted tugboat and another of its ships had found a container that appears to be from the El Faro.

“The state of New Jersey knows how to deal with these things, unfortunately we’ve dealt with them before,” Gov. Christie said. Clouds with rain and thunderstorms are affecting Cuba and Haiti, Puerto Rico, and the Virgin Islands.

Joaquin is the third hurricane of the 2015 Atlantic season, which began in June and ends in November.

Family members of the crew said they were trying to remain optimistic, but were also clearly in agony as they anxiously awaited word of any developments at the Seafarer’s worldwide Union hall in Jacksonville.

The states of North and South Carolina have been particularly hard hit, but the driving rain in recent days has not yet reached the northeastern states and forecasters say the worst is not over quite yet.

Joaquin, meanwhile, was moving away from the Bahamas on Saturday.

“It validates our search efforts and while we are disappointed we did not find the ship today we are hopeful,” Coast Guard spokeswoman Marilyn Fajardo told CNN.

An elderly man died near Clarence Town on Long Island during the hurricane but it has not yet been determined if the storm caused his death, said Capt. Stephen Russell, the director of the Bahamas National Emergency Management Agency.

Coast guard staff said Saturday they had turned up a life ring from the missing boat.

By early Sunday afternoon, Joaquin’s center was located a few 125 miles southwest of Bermuda, with hurricane-force winds extending outward up to 60 miles. 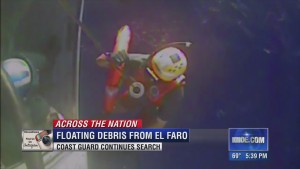 Boating Industry Showing Signs of Life in the V.I. and P.R.