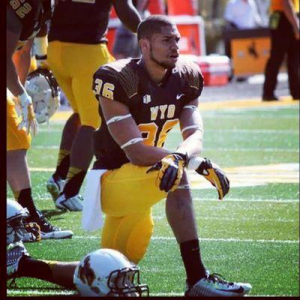 Will Tutein of St. Croix

Like last week, when Wyoming coach Craig Bohl, after his team’s sloppy defensive performance against New Mexico, decided to make some personnel changes in preparation for the Cowboys’ road contest at Appalachian State.

Bohl just so happened to move junior Lucas Wacha from the weak-side spot to a middle linebacker role.

That put junior Will Tutein in direct competition with sophomore Tim Kamana for the newly vacant starting weak-side linebacker position.

And, as maybe only fate would have it, Tutein, a St. Croix native, assumed that starting role just in time for the first college football game that his mother Kendall planned to attend in person.

Tutein recorded his first three tackles of the season in the Cowboys’ 31-13 loss at Appalachian State.

The loss pales in comparison to the importance the game itself carried for Tutein.

“It meant the world to me,” Tutein said. “Every time I got off the field or every time I was on the field waiting for the play to come in, I would always look to her (his mother) and just smile. It was an overwhelming feeling.”

After transferring from Chadron State College, Tutein played in 12 games last season at safety, making four starts. His mother and father, John, watched each game on either their computer or television.

In UW’s season finale, he made five tackles and forced a fumble, and his play stuck out to defensive coordinator Steve Stanard.

That’s because the 6-foot-2, 212-pound Tutein looked and moved more like a linebacker.

“Last year we were so thin at that spot, he had to play safety,” Stanard said. “But I think this is a much better fit for him, especially with his size and wingspan.”

Added Tutein: “I’m always here to help the team, so I’ll do whatever I can to help us win. I pretty much accepted that and said, ‘All right, let’s run with that and see what happens.'”

So during the offseason, he made the move to linebacker, finishing spring drills as Wacha’s backup.

Eventually, though, Bohl moved Wacha, UW’s lone returning linebacker from 2014, to the middle in search of more consistency at that spot.

It opened up an opportunity for Tutein.

“I (wanted to play more), but you just have to be patient with it,” Tutein said. “I had no problem being a backup to Wacha. He’s a great linebacker. But if he was ever to go down, I was there and ready to take the role. That’s what a backup is — waiting for your chance. You practice as much as the starters do, but it just depends on what happens in the game.”

And that opening came just in time for Tutein, who finished high school at Cheyenne Central.

At the beginning of last week, he sat second on the depth chart at weak-side linebacker behind Kamana.

But throughout the week, he had some added motivation.

“Seeing that my mom was going to get to see me play in person for the first time (during college), I made sure to practice my hardest and keep reminding myself that my mom’s going to see me play,” Tutein said. “When we came to walk-throughs on Thursday, coach Stanard told me to work with the (first team) and I was like, all right, cool, this is my shot. I can’t let it go to waste.”

Over time, the end result of the game may fade for Tutein.

He says he’ll remember most the time he spent with his mother and brother in Banner Elk, North Carolina, before the team made the 18-mile bus ride to Boone, North Carolina.

“It was just amazing,” Tutein said. “I had a couple tears that I shed because I got to see them.”

The precious 30 minutes after the game he shared with Kendall and Daniel will be unforgettable as well.

“I have guardians that live in Cheyenne, so I always have family that come to the home games, so I’ve had people here to watch me play who are pretty much like my mother and father,” Tutein said. “But it was just a different feeling having my actual biological mom there, you know?

Feds: 'Natural' Sex Pills Had Real Viagra and Cialis Ingredients In Them