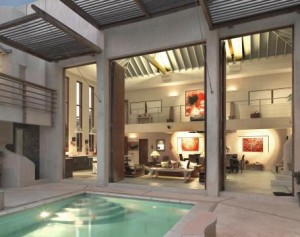 PORT OF SPAIN – A new book which puts contemporary Caribbean architecture in the spotlight will be published in Trinidad this month.

A supporting exhibition, in celebration of contemporary Caribbean architecture, will also be launched in Port of Spain, on November 9.

The exhibition, the first of its kind in the region, is curated from images within the book and will feature large-format, high-quality prints.

Both the book launch and exhibition are part of the 70 anniversary celebrations of acla:works, a Trinidad and Tobago-based architectural practice whose history and founder, Anthony C. Lewis, are tied to the founding of a contemporary design movement in the English-speaking Caribbean.

A history which includes the planning and re-design of Castries – the capital city of St Lucia which was destroyed by fire in 1948, the designing of the US naval base in Chaguaramas, Trinidad, during World War II, and the establishment of the country’s first governing body for local architects – the Trinidad and Tobago Society of Architects, in 1956.

The movement towards a Caribbean contemporary aesthetic in architecture came at a time of great change in the region, when countries like Jamaica and Trinidad and Tobago were becoming independent and seeking to shake the bounds of the British Empire. When people of these emerging nations were hungry for new ways of thinking and doing, and new opportunities.

According to the publishers, the Caribbean’s long history of colonial architecture introduced by settlers from the First World generated complex strains of a vernacular, popularly known as Caribbean architecture. In the face of this significant body of work, local architects faced a challenge to introduce contemporary designs, since there were few built examples to inform public awareness and they often met with resistance.

The publishers’ hope is that the book and exhibition can become a new reference point for architects and those interested in architecture and architectural photography, and expand the scope of discussion on contemporary Caribbean architecture and what is possible in the region.