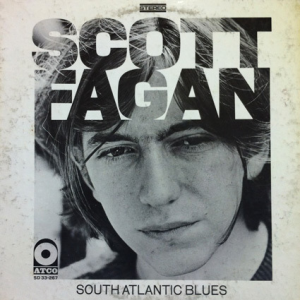 Scott Fagan’s obscure 1968 album South Atlantic Blues finally sees its reissue 47 years after the fact. As Chris Campion at St. Cecilia Knows, the label reissuing the album, explains: “By rights, we should already be celebrating Scott Fagan as one of the icons of his era, alongside Donovan, Tim Buckley, Scott Walker, and Van Morrison.”

Campion’s words aren’t hyperbole, though you could throw Tom Rapp, David Blue, Richie Havens, and David Ackles into the equation for good measure. The album, originally issued on the ATCO label (a division of Atlantic Records) — home to Otis Redding, Iron Butterfly, Buffalo Springfield, and, eventually, AC/DC — hit the cutout bins the next year, 1969, where modern American artist, painter, and printer Jasper Johns discovered it and was inspired to make three lithographs for a series he named “Scott Fagan Record.” The lithographs went on display at the MOMA (Museum of Modern Art) in Manhattan, where a thoroughly shocked Scott Fagan first saw the works.

“I was a staff writer at Screen Gems and I was in my office,” recalls Fagan. “The phone rings and it’s a guy who says his friend loves the album so much that he’s done a piece of artwork inspired by it and they want me to come to the opening. My mother had taught me to always be polite, so I was polite. ‘How did this guy get my number?’ ‘Who the heck are these people?’ I’m thinking there’s some little place down by the Fulton Fish Market and some dude is gluing chicken wishbones and watermelon seeds to a Day-Glo canvas or something. But I was polite.”

“They sent the invitation and it really did look great. [My friends and I] get in the cab and it pulls up to MOMA. We go in and there’s the A-side of my record, a lithograph of it, hanging on the wall with every light in the place it seems shining on it, and this fantastically good-looking group of patrician people are standing around they greet us like royalty. It turned out to be Jasper and his whole circle of people — and it was a very interesting group of people.” (For the record, Johns repurposed both sides of the LP.)

Fagan’s backstory is one of great intrigue. Born in 1945 on 52nd Street in New York City, he was raised in the Virgin Islands, spending most of his young life on St. Thomas where he honed his musical chops and romanced a woman who, unbeknownst to Fagan, gave birth to a baby boy who grew up to be the singer-songwriter Stephin Merritt, of Magnetic Fields. Fagan, who also has four other children via three women, only learned of this paternity in recent years.

“Not until an ex-wife of mine called me to say there’s a kid on ([the NPR show] Fresh Air who’s claiming to be my son,” says Fagan. “Stephin knew. I didn’t know.

“We met a couple of years ago when they were debuting [legendary blues singer and songwriter] Doc Pomus’s movie, AKA Doc Pomus, and I invited Stephin and his mother to the premiere,” continues Fagan with great enthusiasm. “It was wonderful, and we’ve met two other times since then. The boy loves his mother and she loves him and I tread carefully.” He adds, wistfully, “I suppose I will understand the whole story one day.” (In the CD booklet, a conversation between Scott and Stephin is included in the liner notes.)

Fagan believes father and son at least share the same instrument in their voices. “We’ve taken it in different directions,” Fagan suggests. “I’m much more dramatic. My intention was to be a singer and bring attention to it. He is much more of a writer, I think.”

Knowing not of his young son, 18-year-old Scott Fagan sailed to Florida on a 50-foot sloop called “Success,” where, according to him, “a group of girls created a fan club and scraped up $50 and sent me off to New York. I had one phone number and that was Doc Pomus. I called him and went to his room at the Hotel Forrest and sang for him, and he signed me on the spot.” This was 1964.

Fagan recorded for Columbia and Bert Berns’s Bang Records, prior to signing to ATCO. He remembers the sessions for South Atlantic Blues like it happened yesterday. They recorded on W. 56th Street with the engineer Wiley Brooks and producer Elmer Gordon, who’d worked on Pearls Before Swine’s 1967 debut album, One Nation Underground.

For the tune “Tenement Hall,” Fagan called for a free-jazz section that “confounded” his arranger, Horace Ott. None of the first-rate New York studio musicians could play it the way Fagan heard it, so Ott told Scott and his co-writer Joe Kookoolis, “You do it,” and what followed remains one of Fagan’s fondest memories. “It may have been Joe’s finest hour,” he says with a hint of a smile in his voice. “He was bouncing and rolling his eyes and banging on music stands, and finally we got the free jazz section the way we wanted it.” Fagan pauses, “I don’t know what I’m going to do for that section live.”

With the album’s release drawing near (Nov. 20), Fagan is preparing to perform the album at Rough Trade in Brooklyn. “If things go well, my sincerest hope is that this renewed attention to South Atlantic Blues will provide an ongoing channel for additional work,” he admits. He has a completely written 90-minute rock opera from 1971 called Soon that was briefly performed on Broadway as an honest look at the music industry. The work got him and Kookoolis fired.

“The music business part of it is relatively unimportant because things have moved on, but it’s a great, great 90-minute piece of music,” says Fagan. He’d also like to get it out there for the royalties it would bring to Kookoolis’s widow, Abigail. Joe died a few years after being fired.

Asked why South Atlantic Blues never made it, Fagan tells a predictable tale of record industry politics, of A&R people refusing to promote another A&R person’s pet project. The Beatles’ Apple Records held it up for a while until Peter Asher pushed for James Taylor’s debut album. Jerry Schoenbaum at Verve/Forecast loved it and was to take a job at ATCO that never happened, while Fagan already signed to the label and was left without a backer. “I’d heard [Atlantic Records founder and President] Ahmet Ertegun had been fairly negative about the record, but it turns out that Ahmet was an art collector and ‘Scott Fagan Record’ ended up in his personal art collection, Jasper’s lithograph,” he pauses. “What can I tell you?”

“Music history is littered with acts that never achieved commercial success the first time around, and were either overlooked or written off, but are now recognized as an essential part of the canon of popular music,” says Fagan’s current label head, Chris Campion. “Few of them have had to wait as long as Scott Fagan for their time to come around.”

Fagan admits, “I put my heart and soul in the record and I was very disappointed that it disappeared.” It earned cult status, though, with him hearing from people in Hungary, Germany, Poland, and “a guy in Czechoslovakia who tells me there was a little fan club in his town.”

As for this resurgence in interest? Fagan says, “It’s nothing less than a miracle.” 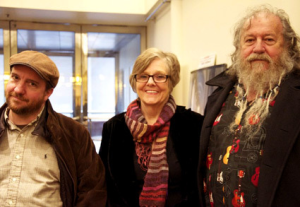 Stephin Merritt (left) stands with his Mom and Scott Fagan