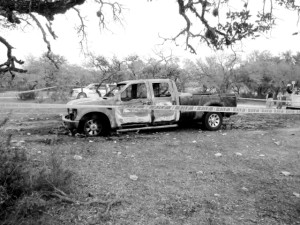 FREDERIKSTED – A body was found burning in a vehicle that firefighters were called to extinguish late Thursday night south of the Henry Rohlsen Airport, according to the Virgin Islands Police Department.

The 911 Emergency Call Center received a call at 10:30 p.m. Thursday of a burning vehicle in Estate Betty’s Hope in the vicinity of the former Texaco site, the VIPD said.

A second call was received by the Call Center at 10:37 p.m., referencing a discharge of gunfire in the same area, according to police.

When police arrived on the scene they discovered a white pickup truck that as on fire. The Virgin Islands Fire Service arrived moments later and extinguished the vehicle fire, when the body was discovered inside.

The identity of the victim will be released, once an autopsy has been performed and the next of kin has been notified, police said.

The area where the body was found is east of Enfield Green and south of the Henry Rohlsen Airport.