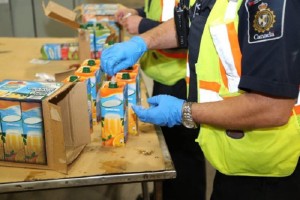 Canada Border Services Agency (CBSA) officers working at the Port of Halifax discovered the about 11.6 gallons of liquid cocaine inside a sea container they were inspecting.

The container was thought to contain different food products originating from Trinidad and Tobago.

Border agents seized the juice containers and contacted the Royal Canadian Mounted Police (RCMP) in Halifax who informed the RCMP Toronto Airport Detachment about the drugs.

According to the RCMP, 11.6 gallons of liquid cocaine can be converted to 24 kg of powdered cocaine.

On Nov. 26, 2015, RCMP arrested and charged two 46-year-old men, one from Mississauga and the other from Whitby, in connection with the investigation.

They face the following charges:Possession for the purpose of trafficking; importing drugs into Canada and conspiracy.

“The RCMP is determined to combat organized crime by arresting criminals who are involved in smuggling illegal drugs into Canada,” Supt. Keith Finn, the officer in charge of GTA RCMP Serious and Organized Crime team, said in a news release. “The result of this investigation demonstrates how the RCMP and its partners work effectively together to ensure the safety and security of Canadians.”