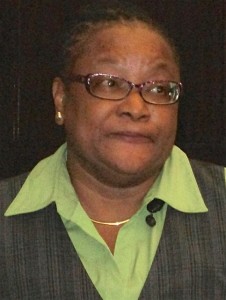 The morning event acknowledged police officers with outstanding performances from covering the period of October to December 2015.

Arlene Chalwell, St. John Deputy Chief of Police, gave sincere words of encouragement to the officers under her command and presented each officer chosen with a Plaque of Appreciation along with a hearty round of applause for their dedication.

Officer Thompson Alexander received the Officer of the Month Award – October, “for exemplifying great potential for leadership, as he’s always reliable and reports for duty on time. While on duty he is able to take charge and lead others by carrying out the duties of a supervisor in their absence. Officer Alexander was also tasked with heading up the New Year’s Eve Initiative and recording the Action Plan.”

Officer Josiah Angol received the Officer of the Month Award – November, as he “continues to always lend a helping hand when needed. Officer Angol reports for duty on time and has always shown initiative by being an officer who is dedicated and dependable.”

Officer Mitsy Prescod received the Officer of the Month Award – December, “for always being ready to assist her fellow officers and exemplifying outstanding dependability by always being ready to take on a second shift when man power fails. Her impeccable service contributes to a positive work environment. Officer Prescod went above and beyond her duty as she transformed the Front Desk Operations by implementing a more direct and simplified method to operate the Front Desk.”
The presentation was held at the St. John Legislative Building in Cruz Bay and was deemed to be enjoyable and morale-building as each officer selected felt appreciated for their individual service to the community.