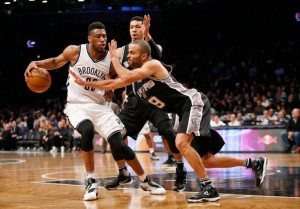 BROOKLYN – At his first pregame news conference since being named the Nets’ interim coach, Tony Brown found an unopened bottle of water awaiting him at the dais. He cheerily proclaimed, “It’s a great day.”

Brown, the Nets’ fifth coach in less than four seasons in Brooklyn, will surely encounter flashier perks at the helm of an N.B.A. team. But they may not compensate for the daunting on-court task ahead of him: leading a franchise searching for direction.

“It’s hard,” Brown said Monday night after the Nets were throttled by the San Antonio Spurs, 106-79. He added: “I was trying to be encouraging to our team, to our players. I think they need to hear that. I’m going to try to lead them that way. Just keep encouraging them.

“We ran into a sledgehammer of a team. They definitely know how to play together, and that’s something that we’re striving to try to do here.”

Since the Nets moved to Brooklyn in 2012 — and for more than a decade before that — the Spurs have been the N.B.A.’s model of stability and success, the antithesis of the Nets, who fired Coach Lionel Hollins and reassigned General Manager Billy King on Sunday.

Gregg Popovich, the N.B.A.’s longest-tenured active head coach, has won five titles since taking over the Spurs during the 1996-97 season. The Nets have had 11 coaches in that span.

“Obviously, we want to play at a pace that’s exciting, that the fans can get behind,” Brown said. “I think he understands that that’s the style of play most teams are trying to get to, and we want to find out if some of the guys we have can fit into that mold.”

Without much time to put his fingerprints on the team, Brown made subtle changes, inserting Donald Sloan and Wayne Ellington into the starting lineup, and Brook Lopez scored 18 points.

But the Nets did not immediately transform into a carbon copy of the Golden State Warriors, slogging their way to 38 first-half points and trailing by 7 at halftime. At one point in the second half, they were down by 30.

The Spurs’ LaMarcus Aldridge, who scored a game-high 25 points, said he had begun to appreciate the organization’s culture of consistency.

“You know what you’re going to get day in and day out, game in, game out, so it makes it easier to do your job, for sure,” said Aldridge, who signed with San Antonio in the off-season.

The Nets have yet to discover the same firm ground in Brooklyn, and with the team now 10-28, building a fan base will continue to be a challenge.

The Spurs had more crowd-pleasing tricks in store. With 5 minutes 9 seconds left in the third quarter, Popovich inserted seldom-used Boban Marjanovic to thunderous applause. Soon after, the 7-foot-3 Marjanovic dunked over Bojan Bogdanovic, drawing a foul, which drew fans out of their seats with delight.

Marjanovic was not done. He threw no-look passes. He dunked while barely picking his feet off the ground. On one possession, he fought Thomas Robinson for an entry pass and snagged the ball out of Robinson’s grasp with one hand, flipping it in for a layup. With each touch, the pro-Spurs crowd seemed near hysterics.

Prokhorov watched this gaudy display from his suite above midcourt.

It was the kind of atmosphere he had always hoped for in Brooklyn. But Monday’s loss only further emphasized how far the Nets had to go before they reached such a level in their own right.

St. Croix’s Duncan had eight points on 4 of 7 shooting from the field. He also contributed 8 rebounds, 2 blocked shots, 2 assists and one steal in the winning effort.

Be sure to watch the unbelievable alley-oop pass from Duncan to the Spurs’ Kawhi Leonard below: