ESPN Agrees With LeBron: Tim Duncan Is The Greatest Power Forward Ever 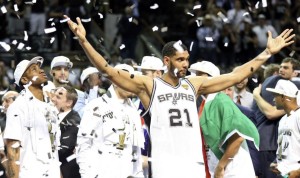 SAN ANTONIO – Throughout the week ESPN has been rolling out rankings for the top 10 players of all time at each position, as voted on by its panel of experts.

If you are a die-hard Spurs fan because of your allegiance to St. Croix’s Tim Duncan, the silver and black lacked any representation in the point guard and small forward categories.

The legendary George Gervin came in at No. 7 on the list of shooting guards, helping to ease the sting somewhat for those folks.

But it was only a matter of time before the Spurs legendary big men made a splash.

The recently released list of top 10 power forwards is bookended by two Spurs, one a mercurial footnote, the other a favorite son.

Dennis Rodman came in at No. 10. The most tenacious rebounder in NBA history, Rodman played with the Spurs for two seasons from 1993-1995, leading the NBA in rebounding each year.
The “Worm” won five NBA championships, though none came with the Spurs.

Duncan edged out No. 2 Karl Malone for the top spot, a fact that should no doubt delight Spurs fans who fall into a tizzy at the mere mention of “The Mailman” as a superior player.

ESPN has not released its center rankings yet, but one should expect to find “The Admiral” David Robinson on there at some point.

The Cleveland Cavaliers and the San Antonio Spurs squared off on Thursday night — a battle of two of the top teams in the league. While the Cavs started strong, the Spurs finished stronger to earn a 99-95 victory.

Despite the tough loss, LeBron James took to Instagram and wrote some words of respect to Tim Duncan after the game ended.

Don’t know how many times we got left to go against one another but I’ve never have and I never will take them for granted! The consistency you’ve shown over the years goes unmatched and as a competitor it’s always a treat to be competing on the same floor as you! Being a professional(professionalism) is so overlooked in our sport but I always knew who I could look to if I ever wasn’t professional about this lovely game and that’s You. From one King to Another and to the Greatest PF to Ever play this game, all Love and Respect Timmy D!

LeBron and “Timmy D” have competed against each other in the postseason three times throughout their careers (2007, ’13, ’14).

Team LeBron won one of those series. Duncan has five rings to LeBron’s two.

They may meet in the playoffs again this year, who knows?

Until then, the Cavs and Spurs face off in one more regular season game on Jan. 30 in Cleveland. 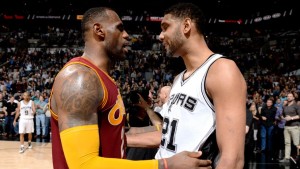 Tourism Conference Kicks Off This Week In The Bahamas

ESPN Agrees With LeBron: Tim Duncan Is The Greatest Power Forward Ever