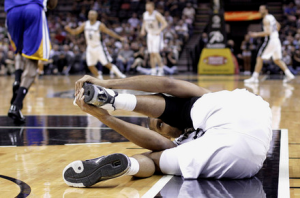 Popovich declined to place a timetable on Duncan’s return.
“I don’t do timetables,” Popovich said. “They never work, because [the situation becomes], ‘But you said it was gonna be [ready].’ When he’s ready, he’s ready.”

Duncan was not in the lineup for Wednesday’s 130-99 rout of the Houston Rockets.

Duncan’s absence is his third in San Antonio’s past four outings. The Spurs held Duncan out of the team’s 120-90 loss to the Golden State Warriors on Monday, and he also missed last Thursday’s win over the Phoenix Suns before returning for a 108-95 win on Friday over the Los Angeles Lakers.

Duncan traveled with the Spurs to Oakland, California, to face the Warriors, but the team sent him back to San Antonio to nurse the injury.

Popovich declined to say whether doctors found anything concerning in the results of Duncan’s MRI.

“They’re rehabbing him and doing what they do,” Popovich said. “Unlike you, I’m not the doc. They just tell me when he’s ready to go.”