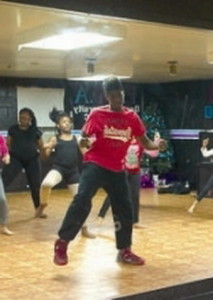 GREENWOOD, S.C. – When Gregory Nelson started dancing with F.I.Y.A. Dance University three years ago, he was quiet and kept to the back row.

This December, he rose above his fellow dancers during the Greenwood Christmas Parade when he performed on 3-foot-tall stilts.

Nelson, 16, was one of the original F.I.Y.A. dancers, which stands for Focus Inspired Young Achievers, when Tavoris Miller opened the studio in 2012. Although Nelson had danced in shows in the British Virgin Islands where he grew up, he had never danced in a studio before.

“It was kind of nerve-racking going into it,” he said.

Nelson moved to Greenwood from Tortola about four years ago with his family, including his 15-year-old sister, Madison Nelson, who also dances at F.I.Y.A. Nelson was born in Greenwood, but moved to the BVI at a young age.

“The Virgin Islands is always home for us because that’s all we know,” Nelson said.

With this year’s Greenwood Christmas Parade theme of “Christmas Around the World,” Miller decided on a Caribbean Christmas theme, which was solidified by Nelson’s experience with stilts.

“Because I’m from the Virgin Islands, it’s a very common thing during the parades,” Nelson said.

Nelson learned how to walk with stilts in about an hour when he was 7 years old.

“To people, it looks like it’s very complicated, but it’s really easy,” Nelson said.
He said once a person can “chip” with stilts, which means walk in place, they can begin to walk with increasingly larger steps.

“Once you learn how to do that, that’s all you need to do,” he said.
Nelson walked for about 45 minutes during the parade without falling, and Miller said Nelson even danced and jumped around while elevated.

“It was probably the most fun I’ve ever had at the studio because it reminded me of back home,” Nelson said. “When the music started playing, it just took me back.”

Nelson said he was quiet when he first began dancing with F.I.Y.A. soon after moving to Greenwood, but Miller helped him break out of his shell through dancing at the studio. He said Miller wants new students to practice up front.

Miller said it has taken about three years to get Nelson toward the front.

“In the process, I’ve see him grow as a student and even to the point where he’s teaching now,” he said.

Never forgetting the Virgin Islands, he said he and his sister create dances and always incorporate one move that reminds them of home.

Even Nelson’s career aspiration of becoming a marine biologist is connected with the Caribbean islands. He is currently studying at Piedmont Technical College with hopes of transferring to Coastal Carolina University to study marine biology.

He said that Tortola is struggling with water filtration and cleanliness, and he wants to understand why that is happening.
“We should always have lovely water,” he said. “I want to figure out what is going on and what’s going on under there.”

Nelson graduated from Greenwood High School in May at age 16 because his education in the Virgin Islands allowed him to advance quickly though the Greenwood school system.

Nelson said he has always been mature because growing up demands maturity.

“Society isn’t the easiest, so you have to mature pretty fast,” he said.

Because Nelson said he does not have much family in Greenwood, F.I.Y.A. is like his “blood family,” and he is at the studio almost every day for several hours helping cheer on other dancers for emotional support.

When he is not at the studio or studying, Gregory Nelson said he likes to play video games with his brother, Nicoy, 16.

As his sister is another dancer at the studio, he said he loves spending time with her.

“Some people don’t like it (dancing with siblings) because they feel like they’re taking attention away,” he said. “She makes me a better dancer.”

Madison Nelson, 15, also said she enjoys dancing with her sibling as she wants him to become better because he is her brother.

“It’s different than just dancing with one of your friends,” she said. “It’s exciting and makes me dance harder.”

Madison Nelson performed alongside her brother during the Christmas parade as a F.I.Y.A. dancer. Although she has never walked on stilts, she said she was happy her brother was able to because of the connection to the Virgin Islands.

“I know he was excited to finally do it again,” she said. “I was really happy for him because he was so happy.”

For now, Gregory Nelson stands on his own feet, but there is a chance of the stilts coming back out if F.I.Y.A. has a Caribbean themed performance.

SPORTS INSIGHT: Jabari Blash of St. Thomas Is At The Crossroads, Which Way Will He Go?