AGUADILLA, Puerto Rico – Federal authorities announced Monday that they discovered more than $4 million worth of cocaine stashed in bushes along Puerto Rico’s north coast as they continue to find more drug shipments but with smaller payloads in the American Caribbean.

Some 340 pounds (154 kilograms) of cocaine were found at Montones beach in the town of Isabela late Thursday night, according to U.S. Customs and Border Protection.

One man was arrested and is being prosecuted in connection with the smuggling event. U.S. Customs and Border Protection (CBP) Air and Marine Operations and Border Patrol Agents, along with the Isabela Municipal Police participated in the seizure.

The estimated value of the contraband is $4.3 million.

The Isabela Municipal Police contacted the Ramey Sector Communications Center notifying of a marine smuggling event near the Villas del Mar Hau hotel in the northwestern coast of the island.

CBP AMO, Border Patrol Agents and officers from Puerto Rico Police FURA units, as well as police from Aguadilla and Barceloneta, arrived to assist on the scene where a 22 foot fiberglass vessel equipped with a single 60 horsepower outboard motor was found. Later a man was located attempting to flee the scene.

After a thorough nighttime search, 5 bales were found covered within the vegetation, containing a total of 133 individual packages of a white powdery substance that tested positive for cocaine.

The narcotics and the arrested man were turned over to U.S. Immigration and Customs Enforcement’s (ICE) -Homeland Security Investigations (HSI) Special Agents for further investigation and prosecution.

“Coordination and communication with municipal police partners through Operation Stonegarden continues to produce results in the interdiction of smuggling operations in the area,” stated Ramiro Cerrillo, Chief Patrol Agent for the Ramey Border Patrol Sector.

The Operation Stonegarden Grant Program (OPSG) is designed to enhance cooperation and coordination from the U.S. Border Patrol with local, tribal, territorial, state and federal law enforcement agencies in a joint mission to secure the border.

In March 2015, an Operation Stongarden led operation produced the seizure of 2,513 pounds (1,140 kilos) of cocaine worth an estimated $32 million.

It’s one of the largest seizures in recent months. A group of federal agencies including the U.S. Coast Guard report an increase in cocaine and marijuana seizures in waters around Puerto Rico and the Virgin Islands in the past year, but with fewer large ones.

“We’re seeing more interdictions with smaller loads,” Capt. Robert Warren, U.S. Coast Guard commander in San Juan, told The Associated Press. “In the past, we got primarily the big loads coming up from the south.”

Warren attributed the increase in part to more federal resources after Puerto Rico reported a record 1,164 killings in 2011.

“It was the growing violence and the association with the drug flow that got national attention,” he said.

The number of slayings in Puerto Rico has since dropped to the lowest point in decades, but drug seizures have only increased.

Puerto Rico police alone have reported a 170 per cent jump in heroin and marijuana seizures and a 47 per cent increase in cocaine seizures. 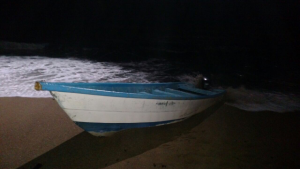