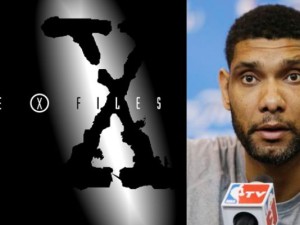 We always knew Tim Duncan was out of this world. We just didn’t have a way to prove it.

No doubt about it, there’s a massive government conspiracy to explain how a 39-year-old seven-footer like Duncan could possibly put up the defensive, rebounding, and blocking numbers that he does while still functioning as an anchor on the offensive end for a championship contender.

St. Croix’s Tim Duncan is literally doing what no other player has done before, given the way the NBA functions now compared to what the league was like when, say, Kareem Abdul-Jabbar played.

So it makes total sense that he was mentioned on last night’s episode of The X-Files.

It was a subtle mention (click here to see it). Nothing alien about it. In a scene, Agent Fox Mulder (David Duchovny) is basically saying that a security camera is stationed about seven feet tall.

“[The killer’s] eyeline is trained above the door, about Tim Duncan height, which would eliminate any 76ers because those guys can’t find the rim.”

(In the scene, Mulder is working with a Philadelphia cop, which is why he makes a joking reference to the awful 76ers, sitting at a league-worst 8-44 in the standings.)

The NBA isn’t short of high-profile guys that are about seven feet tall: DeAndre Jordan, Pau Gasol, Dwight Howard, LaMarcus Aldridge, DeMarcus Cousins. So why go with Tim Duncan? Well, because he’s an alien of course.

But there are also a lot of coincidences when it comes to Duncan’s history as well as that of the show.

They both premiered in the fall of ’93: The X-Files as a new show on Fox and Duncan as a freshman at Wake Forest. The first year that The X-Files aired on Sunday night’s (moving from Fridays) was 1997, the year Duncan was drafted. The show has won five Golden Globe Awards, as Duncan has five championships.

And even though both were considered way past their primes in the 21st century, they both are still churning out quality material, with fans wanting more.