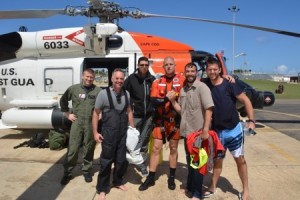 Rescued are four men, three citizens of the United States and one a citizen of South Africa, who reportedly were transiting aboard the Day Dreamer from Puerto Rico to the islands of Turks and Caicos, when their catamaran began taking on water.

Cruise Ships Carnival Glory and Emerald Princess as well as the motor vessel Turks and Caicos Explorer responded to a Coast Guard EGC transmission. Due to the shoal water in the area, the assisting vessels were unable to reach the Day Dreamer’s position. While the Coast Guard rescue helicopter arrived on scene, the assisting vessels remained in the area and served as a communication platform between the distressed vessel and the Coast Guard.

Upon arriving on scene, the Coast Guard helicopter crew confirmed that the Day Dreamer’s starboard pontoon was completely submerged and the cabin was quickly filling with water. The helicopter crew deployed their rescue swimmer and hoisted each of the four boaters onboard via rescue basket. The survivors were transported to Coast Guard Air Station Borinquen, Puerto Rico in good health.

“This case highlights the importance of having the right emergency communication equipment onboard as well as the willingness and selflessness of mariners to aide each other during distress situations at sea,” said Lt. Cmdr. Catherine Phillips, Sector San Juan Command Center supervisor. “Four lives were saved in an expedited fashion thanks to the available communications technology and close coordination between the Day Dreamer, responding vessels and the Coast Guard.”