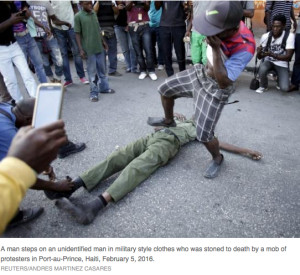 PORT-AU-PRINCE – Angry protesters have stoned to death a former soldier in Haiti, as political violence continued before the country’s president is set to leave office without a successor.

A crowd of opposition protesters attacked the man, who was rallying in a group of retired military officers, on the streets of the capital Port-au-Prince on Friday.

The retired military men were reportedly involved in toppling former elected President Jean-Bertrand Aristide in a U.S.-backed military coup back in 2004.

They were rallying in support of outgoing President Michel Martelly and his hand-picked candidate for the next presidential race.

“We are ready to fight the former military, they killed us in 2004, we will never let that happen again,” an opposition protester identified as Wesner Morin said.

While Martelly’s final presidential term expired on Sunday, politicians in the highly impoverished nation have failed to come up with an interim government to replace him.

A presidential election has been left incomplete, as a runoff vote was cancelled last month amid growing violence and allegations of fraud.

Haiti held its first round of the presidential poll back in October 2015, following which opposition candidates alleged that it was largely tainted by fraud.

Sporadic protest rallies were then staged across the country.
With no solution to the impasse, anti-government demonstrations have intensified in recent days.

The persisting unrest has reopened old political divisions within Haiti, the poorest country in the Western Hemisphere.

Largely poor opposition protesters are demanding the return of exiled Aristide as an interim leader and the ex-military troops supporting Martelly’s camp.

Aristide disbanded the army in 1995 in an attempt to end military dominance over Haitian politics. Martelly, however, energized former fighters last year by taking steps to revive the army.